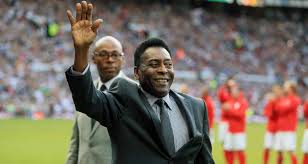 Brazilian football icon, popularly known as Pele, arguably regarded as the greatest football player of all time and a three-time World cup winner has died at the age of 82. He was born on October 23, 1940, in the southeastern city of Tres Coracoes. Pele's real name was Edson Arantes do Nascimento.

Pele is the only footballer in history to win three World cups; 1958, 1962, and, 1970 and he was named athlete of the century by the International Olympic Committee in 1999.

The football legend had been battling colon cancer and had undergone surgery in September 2021 which was followed by chemotherapy.

His reign extended beyond the pitch, with gigs as a movie star, singer, and later sports minister (1995-1998) — one of the first black cabinet members in Brazil.