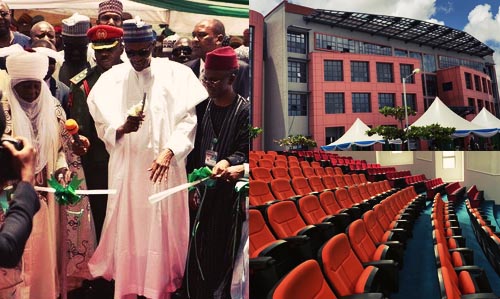 On Thursday, 22nd August 2019 President Muhammadu Buhari commissioned multiple projects in Kaduna state executed by his administration in collaboration with the Kaduna State Government and other developmental partners. While commissioning the projects, the President pledged that his administration will continue to initiate and implement policies that are people-oriented so as to change the narrative for Nigerians.

In his speech at the commissioning of the Zaria Water Supply Expansion Project, Buhari disclosed that his administration has, in spite of lean resources, spent N11.8 billion on the construction of the multipurpose 186.1 Million Cubic Meters Galma Dam as its counterpart funding to the project.

He further added that the multilateral nature of the funding for this project underscores the great importance the Kaduna State Government and the Federal Government attach to this project, which is designed to provide adequate water to the growing ancient city of Zaria and its environs.

He was quoted saying ‘‘I am aware that the Governor undertook to offset all outstanding payments to the contractor in 2015 which led to the resumption of construction activities at the 150 Million Litres-per- day water treatment plant.’’ Buhari said.

He also applauded the commitment of partners in the project such as the Islamic Development Bank (IDB) and the African Development Bank (ADB), for providing the needed funding to undertake and complete the transmission mains, service reservoirs, booster stations and distribution network of the project.

The President also commissioned the newly completed Post-Graduate Centre of Excellence at the Ahmadu Bello University (ABU), Zaria, constructed and donated to the school by the Central Bank of Nigeria (CBN).

The facility which is one of the nine that are being executed by the CBN in some selected Universities across the geopolitical zones.

That of ABU and the University of Nigeria Nsukka (UNN) have so far been completed and commissioned by the president.

Speaking at the occasion, CBN Governor, Mr Godwin Emefiele disclosed that each of the centres especially, the one in Enugu, Ibadan and this one in ABU costs CBN nothing less than N7 billion.

Adding that, the Government is committed to the upliftment of education that is way from 2015 to this year (2019), Federal Government budgeted and disbursed the sum of 1.3Trillion naira to the education sector.

This funds according to him exclude overhead costs.