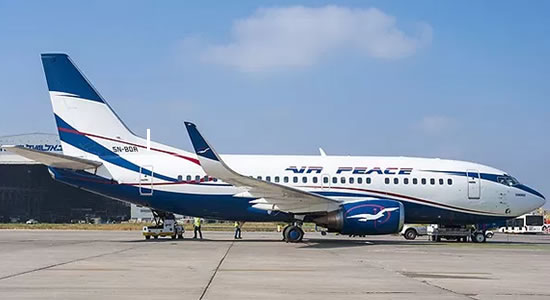 Air Peace airline has on Thursday received the third brand new Embraer 195-E2 aircraft out of the 13 new aircraft expected to be delivered to the airline by the Embraer Aircraft Manufacturing Company in Brazil. Chairman of Air Peace airline, Allen Onyema said this during the delivery ceremony at the Nnamdi Azikiwe International airport in Abuja, adding that two additional aircraft are expected to be delivered by August. The purchase of the new aircraft comes after the Federal Government’s waiver of customs duty on airlines, encouraging the airline’s purchase of new aircraft for better operations and the improvement of the aviation sector.

Speaking, Onyema said, the minister of Aviation, Hadi Sirika had challenged airline operators to use brand new aircraft in a bid to improve the economy.

“He (Sirika) didn’t want Nigeria to be a dumping ground for old planes; not that the old planes are not safe, but at the same time, he has to protect the economy of the nation.

“The amount of money spent on maintaining old planes is huge, as whatever you make you give it to the MROs (maintenance, repair and overhaul firms),” Onyema said.

He added that “At that time many of us did not understand it. However, later we started to understand why the government through the minister is pushing that we should purchase brand new planes.”

Also, the Director-General of the Nigerian Civil Aviation Authority, Musa Nuhu lauded the purchase of the Embraer 195-E2 aircraft, saying the aircraft is the right size for the Nigerian market, as he described it environmentally friendly with less noise and less pollution.

He urged other airlines to purchase similar aircraft.

Air Peace had in 2019 announced the purchase of 30 Embraer 195-E2 aircraft, of which 13 were firm orders and 13 were purchase right orders from the manufacturing company.