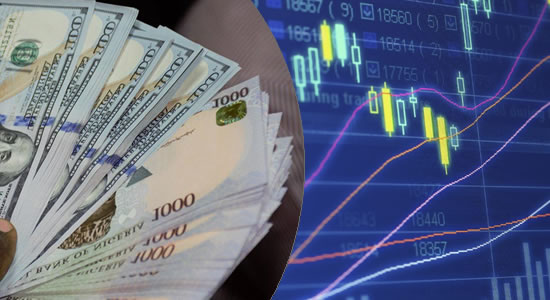 Worries And Fear Looms As Naira Continue To Fall

The naira has suffered another major setback, losing N5 to close at N550 to a dollar at the parallel market on Monday. Naira has been subjected to pressure in the past two weeks, partly due to speculative attitude and quest to make more profit for those who hoard dollars, making demands high to manufacturers who go hunting for the foreign exchange. The exchange of Naira at the official market goes at N410.5 to a dollar and the N139.49 disparity between the official and parallel market has lead to scarcity of the foreign exchange as merchants see this as an opportunity to rip off investors.

The constant depreciation of Naira was premised on the policy of the CBN that stopped the supply of dollars to bureau de Change and microfinance banks from dealing officially with the dollar.

Experts revealed that the fall in the naira value was blamed on the speculators hoarding the available dollar to maximise profit. Bismarck Rewane, the Managing Director, Financial Derivatives Company Limited, said delaying of the multiple exchange rate system which had bedevilled the economy had been a subject of controversy for a long period.

In his statement, “Now that it appears settled we should expect a crawling peg method and an increase in forex supply to ensure equilibrium in the market. That notwithstanding, the CBN’s attempt to mop up excess liquidity could serve as a temporary antidote to consumer price inflation which still remains stubbornly high (18.12 per cent),”

Rewane revealed that the naira summersault has increased the demand on the forex market, demand pressure and rationing.
He suggested a full adoption of a floating exchange rate system determine by the forces to demand and supply.
In a similar manner, the international monetary Fund (IMF) has disclosed that the exchange rate rigidity has constrained the economy’s ability to absorb external shocks.

The IMF while explaining said, restrictions on access to foreign exchange for certain categories of goods and multiple exchange rates create distortions in both private and public sectors decision making. They discourage long-term investment, encourage smuggling and provide avenues for corruption.

The American economic giant has called for a unified exchange rate for the naira to promote growth and attract foreign capital.

According to the IMF, foreign exchange backlog and shortages are intensifying Balance of Payment (BoP) pressures insisting that exchange rate unification was imperative to reduce ( BoP) risks. It is said that fiscal deficit will stay elevated in the medium term, while additional domestic revenue mobilisation is required to reduce fiscal risks.

Some experts like Oghenefejiro Eduviere, a global forex trading dealer revealed that the volatility of the market would continue unabated with inflation consequence by the rise in crude oil prices as currently the Brent crude now goes for $73.33 per barrel.