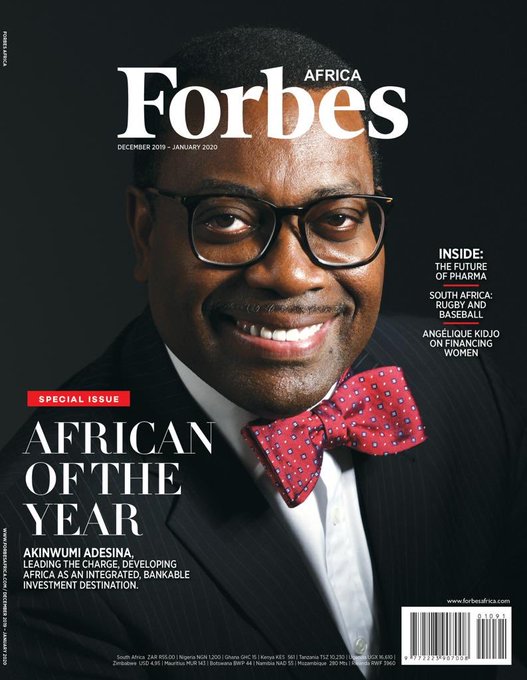 Former Nigerian Minister of Agriculture and president of the African Development Bank (AfDB), Akinwumi Adesina has been named Forbes African of the Year for his roles in poverty eradication on the continent.

Forbes Africa on Thursday, December 6, announced the winners of its All African Business Leaders Awards (AABLA) for 2019 edition. The business magazine then went on to declare Mr Adeshina as the winner of this years African of the year.

“#AABLA2019: The All Africa ‘African Of The Year’ winner in the 2019 @AABLAwards in Partnership with @cnbcafrica – presented by The Radisson Group is Akinwumi Adesina @akin_adesina, President, @AfDB_Group,”

The AFDB president has taken to social media to celebrate his award as ‘African of the Year’ for 2019 by Forbes.

"I am humbled and greatly honoured to be named African of the Year by Forbes Africa."

“My darling wife Grace has always been my rock with her love, wise counsels, prayers and support. Forbes Africa’s “African of the Year” Award is jointly shared with Grace. Thank you very much, honey!”

“African of the Year Award by Forbes Africa: I give a big “High 5” to all the amazing staff and highly supportive Boards of Governors and Directors of the African Development Bank Group. Together, we continue to fast-track Africa’s development!”

Adesina, who became the AfDB president in 2015, has since expressed his intentions to seek the second term in office after his tenure expires in 2020.

“I will run as a candidate to complete the work we have started,” he had told journalists at the closing press conference of the bank’s annual meeting in Malabo, Equatorial Guinea.