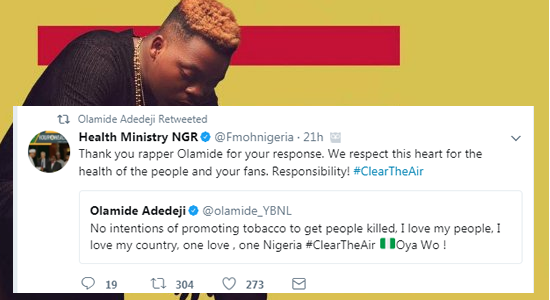 Ministry Of Health Parleys Olamide After "Wo" Video Criticism

The Federal Ministry of Health has reached out to star rapper and acclaimed "Street Ambassador", Olamide, after what was widely perceived by the latter's fans as an unfair criticism of his latest hit video "Wo." In a tweet on Tuesday, the Ministry thanked Olamide for his response to their initial criticism, and adding that "We respect this heart for the health of the people and your fans."

Olamide had tweeted that he had "No intentions of promoting tobacco to get people killed, I love my people, I love my country, one love, one Nigeria," prompting the response by the Ministry.

The Ministry went on to reveal that it had a call with Olamide over the matter and refuted insinuations that it was instigating a ban on the said video.

The Ministry in a series of tweets, said "We had a good call with rapper Olamide who learned that Tobacco kills 6 Million people yearly. He committed to making things right!

"We are in the business of public health promotion. It is not in our mandate to ban music. We thank Olamide for his cooperation. One Nigeria!"

The tweets were subsequently re-tweeted by Olamide, in an obvious endorsement of claims by the Ministry.

Meanwhile, amidst rumours that "Wo" and other videos were banned, the National Broadcasting Commission (NBC) has denied any such ban. The commission said it was surprised that news of the rumoured ban had gone viral.