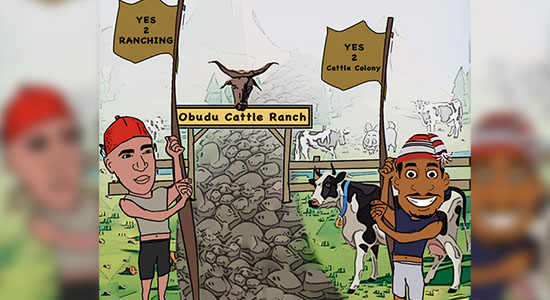 RUGA SETTLEMENTS: THE POLITICAL MYOPIA OF THE SOUTH by Frank Eze

One of the security challenges that have continued to plague the country is the recurring violent clashes between pastoralists and farmers. The situation which is predominant in most states including Zamfara, Benue, Plateau, Imo, Abia, Taraba, Sokoto and Adamawa among others has led to the loss of lives and properties worth billions of Naira.

These clashes have continued to preoccupy successive administrations and security experts alike. To put a permanent end to this perennial challenge, the Federal Government initiated the RUGA scheme designed to find permanent abodes for pastoralists who are scattered all over the country and in constant clashes with indigent farmers.

The Ruga Settlement scheme as succinctly stated by the government specifically seeks to settle migrant pastoral families in an organized place with provision of necessary and adequate basic amenities such as schools, hospitals, road networks, vet clinics, markets and manufacturing entities that will process and add value to meats and animal products.

The overall benefit of the scheme to the nation and host communities will include the following;

➢ a drastic reduction in conflicts between herders and farmers,

➢ a boost in animal protection complete with a value chain that will increase the quality and hygiene of livestock in terms of beef and milk production,

➢ increased quality of feeding and access to animal care,

➢ Improved access to credit facilities to persons in livestock business; and

➢ security for pastoral families and curtailment of cattle rustling and criminalities by migrant herdsmen.

It is obvious that the RUGA scheme is purely a subtle way of coercing every herdsman into ranching. This is because it will put a permanent stop to the challenge posed by marauding herdsmen.

Sadly, although many have agreed that ranching is the new way to go since the nomadic character of the current grazing system is largely responsible for the perennial violent clashes, efforts by the government to do so by promoting the RUGA system has been unwittingly condemned by my people from the South-South and South-east regions.

More worrisome is the fact should the Federal Government decide to go on with the RUGA scheme in the predominantly Northern states that signified interest in the program, states in the South will be losing a great opportunity to reap the vast economic advantages that the scheme portends.

I hope in a few years from now when the scheme begins to yield the dividends expected of it, politicians and my brothers from the South do not complain of marginalization as in an actual sense “ we shot ourselves in the leg  ” when the program was being set-up.

In case Nigerians have forgotten, the presidential candidate of the PDP in the last general elections, AtikuAbubakar had proposed to establish the RUGA settlement across the country to address farmers/herders clashes. He stated this while appearing on a presidential debate hosted by KadariaAhmed, wherein, he was openly applauded for the beautiful initiative he proposed to bring an end to an age long crisis. The video footage which went viral can be downloaded on the following youtube address; https://www.youtube.com/watch?v=oTSeyfoH2HU

Former Governor of Ekiti, AyodeleFayose had also canvassed for settlements for herders to curb open grazing. The Edo, Benue, Sokoto and some other state governments had also conceived the same idea. What then is the hullabaloo about the RUGA system proposed by this administration?

Let it be known that the RUGA settlement and Ranching are the same. The whole essence is not to deprive natives of lands but to curb insecurity as well as diversify the rearing of livestock. Our southern brothers that have become so critical of the project must realize that livestock rearing isn't an exclusive preserve of the Fulanis. Also that a PDP government is not the one promoting it does not make it useless.

We are losing a big opportunity to invest in a business venture that has been dominated by the Fulanis for centuries. I pray we realise the mistake our ego and sentiments may cause us in the not too distant future.