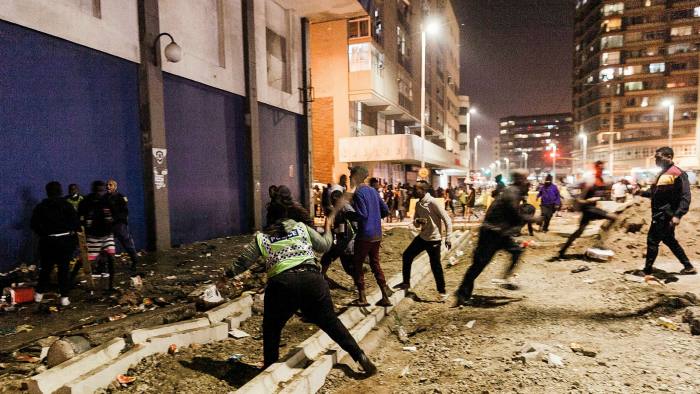 South African government has deployed soldiers to tackle deadly ongoing unrest triggered by the jailing of former President Jacob Zuma. Businesses were destroyed and looted, buildings set on fire on Monday as Zuma challenged his sentence at a hearing in the top court. At least six people have lost their lives and 200 others arrested since the unrest started last week, after Zuma handed himself in and began his 15-month sentence. Zuma was convicted of contempt of court after failing to attend an inquiry into corruption during his presidency. The 79-year-old, who denies corruption, is optimistic to get the sentence rescinded or reduced at the Constitutional Court hearing. However, legal experts say his chances of success are slim. Supporters of the ex-president on Saturday launched a massive protest over his imprisonment, burning trucks, commercial property, and blocking major roads in KwaZulu-Natal province.

They demanded his immediate release from prison.

Zuma started serving a 15-month sentence. His bid to be released from the Estcourt Correctional Centre was rejected by a regional court on Friday and he is set to make another attempt with the country’s apex court tomorrow.

His supporters in KwaZulu-Natal, his home area, blocked roads, set trucks alight, and damaged shops which they then looted at various spots in the province.

The violence raged as the Constitutional Court was reviewing a landmark decision to jail Zuma for contempt of court. An announcement is expected later.

“What we are saying is that this court made fundamentally rescindable errors,” Zuma’s lawyer Dali Mpofu said in an on-line hearing before nine of the court’s 11 judges.

Zuma had been treated unfairly and his “right to mitigation was limited,” he said.

But one of the judges, Steven Majiedt, bluntly said Zuma had been convicted “because he disobeyed the order of this court.”