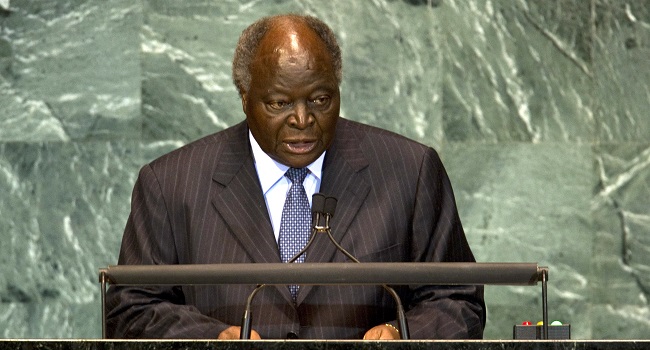 Kenya's former President, Mwai Kibaki, who led for over a decade has died at the age of 90, his successor, President Uhuru Kenyatta said on Friday. Kenyatta said this in an address on state television, ordering a period of national mourning until the day Kibaki is to be buried, adding that the nation's flags will be flown at half-mast. He said, “It is a sad day for us as a country. We have lost a great leader.”

Kenyatta described the former president' as "a quintessential patriot" and recalled "his dignity, his diligence, candor, and concern for the well-being of all Kenyans", as well his achievements including his role in the ushering of a new constitution and his fight against corruption.

“As a leading figure in Kenya’s post-independence history… Kibaki earned the biding respect and affection of the people of this nation,” Kenyatta said.

“President Kibaki will forever be remembered as a gentleman in Kenya’s politics. A brilliant debater whose eloquence, wit and charm won the day time and time again.”

Kibaki's political career spanned decades including his time as a member of parliament and as vice president to Daniel Arap Moi, who he replaced in 2002.