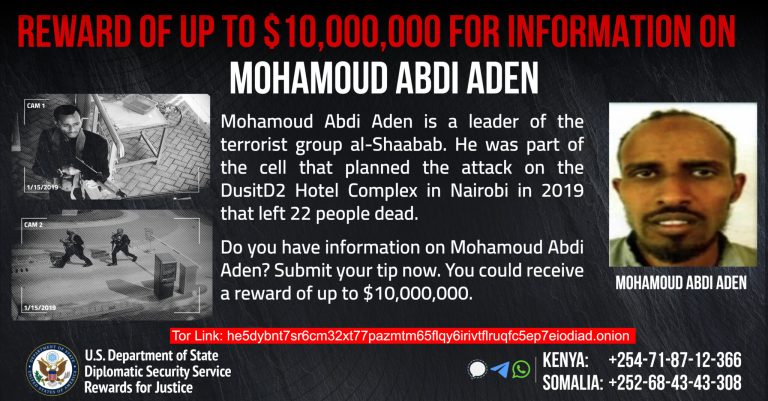 The United States announced it was offering a reward of up to $10m (£8m) million for information about Mohamoud Abdi Aden, a man described as the “terror mastermind” of a bloody hotel attack in Kenya in 2019. He is described as the Somalia-based Al-Shabaab jijadist group that perpetrated several deadly attacks in neighbouring Kenya.

The Al-Qaeda affiliated group claimed responsibility for the January 15, 2019 siege on the upmarket DusitD2 hotel compound in the Kenyan capital Nairabi that lasted almost 20 hours during which about 21 people lost their lives, including a US citizen.

The support is offered with the full support of Kenyan authorities.

Al-Shabab has carried out several attacks in Kenya saying they were in retaliation for sending troops into Somalia in 2011 as part of the African Union mission to fight the militants.

In 2013, the terror group laid siege to the Westgate shopping mall in Nairobi for four days, leaving 67 people dead.