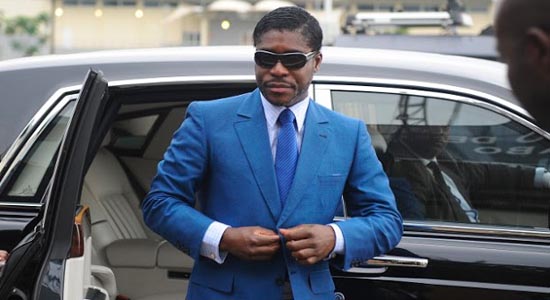 A French court handed down a three-year suspended jail term on Friday to the son of Equatorial Guinea's leader, Teodorin Obiang, after a landmark graft trial that lifted the lid on his playboy Paris lifestyle. The 48-year-old vice-president of the West African state, who was tried in absentia, was also given a suspended fine of 30 million euros by judges for embezzlement, money laundering, corruption and abuse of trust.

The case, which was spearheaded by two anti-corruption groups, is the first of three targeting families of African leaders accused of using ill-gotten gains to live it up in France. The Paris court found Obiang, 48, guilty of embezzlement, and ordered the confiscation of more than 100 million euros worth of his French assets. Obiang denied the charges.

The case is the first of several to reach court in a broader judicial investigation into allegations of illicit acquisitions in France by long-time leaders and family relatives in several African countries including Gabon and Congo Republic. Obiang was first put on trial in January but the case, 10 years in the works, was postponed after his lawyers argued they had not had enough time to prepare his defense.

Obiang’s luxury residence on Paris’ Avenue Foch - a grand, sweeping road near the Arc de Triomphe often favored by wealthy African expatriates and politicians - was among the assets scrutinized during the trial. The property, bought for 25 million euros in 2005, had a gym, hair-dressing studio and disco with cinema screen.

Paris prosecutor Jean-Yves Lourgouilloux said Obiang’s “fraudulent spending” amounted to more than 150 million euros. Prosecutors argued he could not have funded the purchases without pilfering public money in his West African homeland.

His father, President Teodoro Obiang Nguema Mbasogo, has ruled Equatorial Guinea - a former Spanish colony - for more than three decades, making him one of Africa’s longest-serving leaders, and rights groups have labeled his administration as one of the world’s most corrupt.