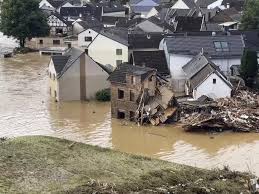 Germany Flood Kills 42, Many Others Missing

Torrential downpours in parts of Western and Central Germany has killed at least 42 people while many are missing following severe floods, which caused immense damage to property and transport disruption. It follows record rainfall that has caused major rivers to burst their banks. The worst of the flooding has been in the states of Rhineland-Palatinate and North Rhine-Westphalia, where buildings and cars have been washed away. At least six others have died in neighbouring Belgium, and the city of Liège has urged all residents to leave. The Netherlands has also been badly hit, with flooding rivers destroying many houses in the southern province of Limburg. A number of care homes have also been evacuated. Authorities used inflatable boats and helicopters, and the German army deployed 200 soldiers to assist in the rescue operation.

The governor of Rhineland-Palatinate state, Malu Dreyer, said on Thursday
“There are people dead, there are people missing, there are many who are still in danger,” “We have never seen such a disaster. It’s really devastating.”

The full extent of the damage in the region was still unclear after many villages were cut off by floodwater and landslides that made roads impassable.

German Chancellor Angela Merkel who is in the US ahead of a meeting with President Joe Biden,has expressed her shock at the scale of the catastrophe. She said she was "grieving those who have lost their lives" in the flooding.

"My thoughts are with you, and you can trust that all forces of our government - federal, regional and community - collectively will do everything under the most difficult conditions to save lives, alleviate dangers and to relieve distress."