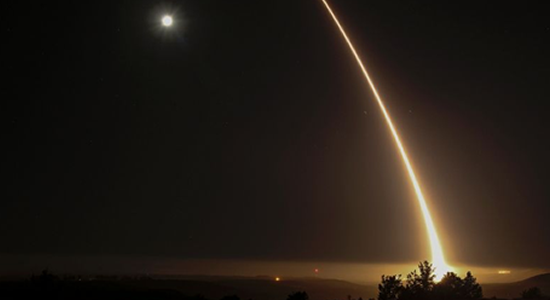 The United States military on Wednesday, conducted a test of an unarmed intercontinental ballistic missile, in a move described as a warning to both North Korea, which recently tested its missile arsenal, and in China, which has been urged by the Trump administration to pressure North Korea on its nuclear program.

The New York Times reports that the test came a day after Secretary of State Rex W. Tillerson had told reporters at the State Department on Tuesday that the United States was not seeking a regime change in North Korea and would be willing to talk to Pyongyang.

He assured North Korea that “we are not your enemy,” but added that Pyongyang “is presenting an unacceptable threat to us and we have to respond.”

“We would like to sit and have a dialogue with them,” Mr Tillerson said.

American intelligence agencies recently said that North Korea was developing a missile that could reach the interior of the United States in about a year.

“We’ll handle North Korea,” President Trump said on Monday before he met with his cabinet. “We’re going to be able to handle them. It will be handled. We handle everything.”

The unarmed Minuteman III intercontinental ballistic missile was launched from Vandenberg Air Force Base in California, according to an official statement from the Air Force Global Strike Command released early Wednesday after the test was completed.

“While not a response to recent North Korean actions, the test demonstrates that the United States’ nuclear enterprise is safe, secure, effective and ready to be able to deter, detect and defend against attacks on the United States and its allies,” the statement said.

The statement said the missile’s re-entry vehicle travelled about 4,200 miles over the Pacific Ocean to the Kwajalein Atoll in the Marshall Islands. The test was described as a way to “verify the accuracy and reliability of the ICBM weapon system, providing valuable data to ensure a continued safe, secure and effective nuclear deterrent.”