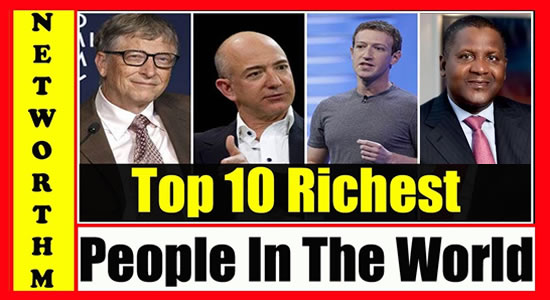 American business magazine Forbes has released its 32nd annual ranking of the world’s billionaires. The magazine lists more than 2,200 billionaires around the world who hold a combined net worth of $9.1 trillion, up 18% from a year ago. Interestingly, no Saudi Arabians made the Forbes Billionaires list this year.

Amazon founder and CEO Jeff Bezos is the richest person on the planet and the first centi-billionaire in our annual ranking. Shares of his e-commerce giant Amazon rose 59% in 12 months, helping boost his fortune by a whopping $39.2 billion the biggest one-year gain ever. Forbes estimates that Mr Bezos, 54, who founded the online retail giant in 1994, is worth $112bn.

Microsoft co-founder Bill Gates dropped one spot from last year to No. 2, with $90 billion. Gates haas been on the richest person Forbes list for 18 of the past 24 years. The 62-year-old, who co-founded Microsoft in 1975, has given away much of his wealth and has set up a charitable foundation with his wife to improve global health.

American business magnate and investor Warren Buffett stands at the third spot on the list with $84 billion.

On number four Chairman and CEO of luxury goods company LVMH, Bernard Arnault, and his family, with $72 billion, they are behind the LVMH luxury goods empire, which includes brands such as Louis Vuitton, Christian Dior and Moet & Chandon. Their fortune stands at $72bn.

Facebook’s co-founder Mark Zuckerberg, 33, is on number five, with an estimated $71 billion. He is the youngest of the top five.

Forbes said a record 35 people have joined the list of the world’s billionaires, with the magazine calculating there are now 2,208 people with a net worth of more than 1bn dollars.