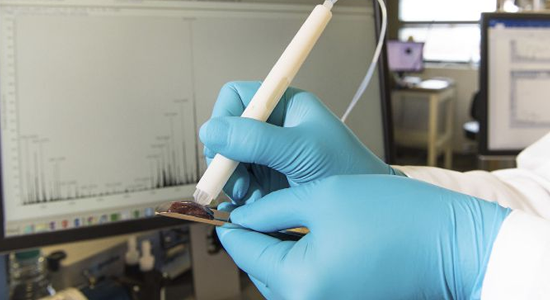 Scientists Invented A Pen That Can Screen For Cancer In Seconds

A cancer diagnosis is a drawn out process. Weeks can pass between when the offending lump, blurry x-ray, or discolored skin is first identified, and when doctors are finally able to say categorically whether or not what came out in the initial scans is indeed a bout of the Big C.
Biopsies, in particular, can take forever. The scientific standard for determining whether or not a tissue sample is cancerous is called mass spectrometry, and it is not simple.

Large machines in far-off labs run a sample through a series of complicated processes, then spit out data that require specialized training to understand. Final results can take days, or even weeks to get.

But scientists out of the University of Texas, Austin, have a solution that could do all that in 10 seconds flat. The “MasSpec pen,” as they are calling it, looks a lot like a big, white sharpie with a cord running down the back.

When doctors touch the tip of the pen to a suspect tissue sample and press a pedal, the pen releases a small droplet of water. The pen then sucks up the water along with some residual tissue into an onsite mass spectrometer and analyzes everything right there on the spot.

In lab settings, using mice and human tissue samples, researchers were able to correctly identify lung, ovary, thyroid, and breast cancers and do so with around 93% accuracy. The team is currently working to add more types into the mix.

The pen also has the potential to be used in cancer treatment. Its tip is 3D-printed using surgical-ready plastic and because it uses water instead of the high-voltage, pressurized gasses, and toxic solvents and chemicals employed in standard mass spectrometry, the pen doesn’t pose a threat to the healthy tissue nearby the tumor site.

Combine that with how small the pen is, and the device can be used in live patients, during surgery. This means doctors can use the pen to ensure every last remnant of the offending tissue is removed, before the patient is closed up, eliminating the need to send more samples away to a lab to see if they got it all, and lowering the risk of relapse.

The device isn’t perfect. Though the pen is small, reports STAT, it’s just the intake mechanism. The spectrometer that the pen feeds is still just as big as the legacy models and can take up a lot of room in the operating arena. The pen also has yet to be tested in real-world settings, on human patients.

Those trials are in the works, Livia Eberlin, a professor at UT-Austin who helped design the device, told STAT. “We’re going to start testing it in surgeries hopefully early next year.”

My mother has survived five different types of cancer. The waiting and wondering, both for her and our family, was torturous. During her last bout, with lung cancer, we had to take her to the hospital first to image the tumor, then again to biopsy it, then again to remove nearby lymph nodes—and this was all before her doctors did anything to treat the disease itself. After the actual surgery, we still had to wait another week to find out if the doctors were sure that they got all the cancerous tissue out of her lungs. That particular form of anticipation is awful.

The MasSpec Pen may one day provide some major relief from all that waiting, worrying, and wondering, but were it to provide only a modest mercy, that would still be a big improvement.