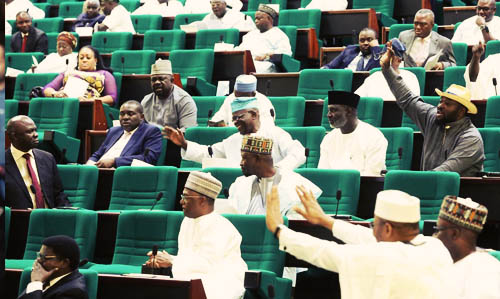 2020 Budget: House Of Reps Kicks, Says 5% Allocation For Health Must Be Increased To 15%

The House of Representatives has demanded that the Federal Government should raise the allocation of the health sector from 5% to 15% considering the deplorable condition of the Nigerian Health sector.

The Reps made this statement in reaction to the budget presented by President Buhari yesterday to the joint session of the lawmakers which indicated that only 5% of the budget will go to the health sector.

Accordingly, the observation was raised by, Ntufam Mbora, titled, “Deplorable state of government-owned health facilities” and was unanimously adopted by the whole house.

While moving the motion, Mbora revealed since December 1983, Military Junta, the Nigerian economy has been mismanaged, debt profile keeps swelling and the health sector has remained in shambles relegating public hospitals to mere consulting clinics devoid of all amenities that a decent hospital in a sane society should have.

The lawmaker added, 35 years later, including the 19 years of democratic rule (from 1999 to date) the public health system has suffered neglect from government ranging from underfunding, understaffed to lack of drugs and absence of modern art health equipments.

Consequently, he added this has made Nigerians lose hope in government health facilities thereby giving room for the privileged ones to seek medical tourism. He said the health sector allocation at this juncture has called for re-evaluation if actually they should be responsible for Nigerians.

Mbora noted that the National Health Act, which was targeted at establishing a framework for the regulation, development, and management of the National Health System, as well as standardizing and managing health services and other related matters, did not achieve the set objectives for the Universal Health Coverage in meeting the Sustainable Development Goals.

Therefore the Reps are calling for a positive review of the health allocation to 15% from the current state.