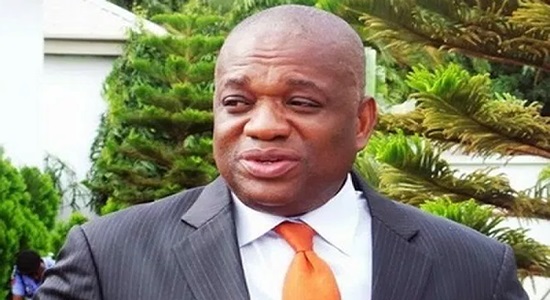 Two socio-political Organizations, Ndi-Abia United and Abia Good Governance Initiative, have demanded that the FG and the EFCC should return loot recovered from the convicted, Orji Kalu back to the Abia state government since the loot initially belongs to the state.

Orji Kalu was convicted and found guilty on 39 count charges by the Federal High Court sitting in Lagos over money laundering and fraud to the tune of N7.2 billion.

Kalu was convicted alongside side his Commissioner of finance during his tenure as a governor, Mr Jones Udeogo.

Addressing pressmen on Monday on behalf of the group in Aba, Emeka Kanu and Chidi Nkume opined that it would be unfair on the part of the federal government to take the money into Federal Treasury instead of Abia state government account who is the rightful owner of the loot recovered.

They noted that the money belong to Abians and so shall be returned to the state coffers, they called on the Anti-graft agency to extend it searchlight to both serving and the past political office holders to recover more loots, saying hundreds of billions were looted by the states political rulers.

Houses, Estates, factories, exotic cars, shopping malls both within and outside Nigeria were acquired with the said loot; some are even building Universities in Ghana and other places the duo added.

Meanwhile, a group known as the Coalition of Civil Society (COSCON) has applauded the EFCC and the Judiciary for convicting the case into a logical conclusion after 12 yrs of trial.

While reacting to the 12yrs jail term, Nelson Ndukwe, the Director of the Coalition group said that the Judges and the anti-graft agency has proven their worth that they are not a rubber stamp in the hand of the Buhari led government in Nigeria.

He applauded President Buhari for not interfering in the judicial process that lead to the successful conviction despite Kalu being a member of the ruling party (APC).