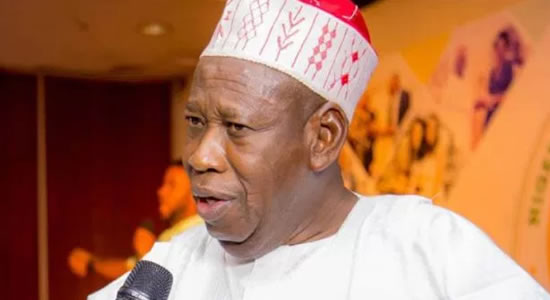 The Kano state Council of Ulama has kicked against their Governor, Abdullahi Umar Ganduje over his recent decision to ban street begging of Almjiri street kids across Kano state and its environs, describing the Governor's action as lacking seriousness in all ramifications.

The Council of the Ulama’s in their collective statement said; “To us at the Council of Ulama, the government cannot do it alone and it does not look serious about it.

They are just doing it to appease their masters abroad, or get their money or some kind of noisemaking.

Or they might have been accused of something from somewhere for which they simply organise a ceremony and that is all. That is our opinion”

Speaking on behalf of the Ulama’s, Sheikh Ibrahim Khaleel, the Chairman of the council revealed that the steps which would have been taken to address the menace are far from the Governors reach.

He added, the Governor did not take the right steps which would have portray him as being serious about bringing the begging to a halt in the state.

According to the Chairman who disclosed he is also an advocator against street begging, he gave instances of some initiatives that were taken by the past administration to address the problem, saying stakeholders were at the centre stage of the whole process.

In his opinion, it is not only Almajiri form of street begging that deserve serious attention but also all form of begging, suggesting the first approach to the governor was suppose to be meeting with stakeholders and hearing their views on how to go about it.

Sheikh Khaleel explained that street begging are in categories, as others are students of qur’anic school, others are just rooming the street and begging where they find it easy, while others were being sent out by their parent from villages to come and be begging in the city.

Therefore, he suggested identifying all these categories and their various qur’anic school teachers would be a first panacea to addressing the menace.

He further stated, for the ban to work there has to be cooperation between the government and the Quranic clerics.

You have to sit with them and understand why they engage in begging, get some statistics, know the total number of those engaging in street begging among them.

“More so, you cannot stop begging in the state without joining hands with the neighbouring states” Sheikh Khaleel added.