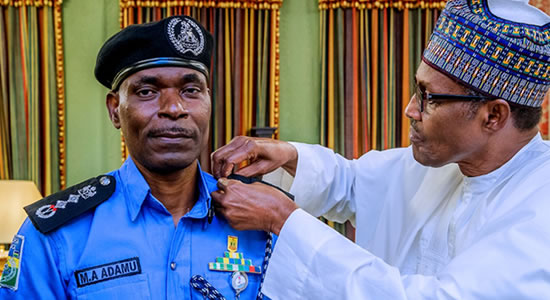 Acting Inspector General of Police Mohammed Adamu has been confirmed as the Nation's Police chief by President Muhammadu Buhari. This is coming after a meeting between the President, 36 state governors and chairman of the Police Service Commission (PSC), Musliu Smith at the Presidential Villa, Abuja.

Born on November 9, 1961, Mohammed was enlisted into the Nigeria Police Force in 1986. He has a bachelor degree in Geography.

Mohammed was a deputy commissioner of police in Ekiti state and had served at the Interpol where he served for over a decade.

The new police boss, who was the President of Interpol for five years, rose to the rank of assistant inspector general of police (AIG). Mohammed served as the Commissioner of Police in Enugu State.

The Nasarawa-born police chief was at one time a director of peacekeeping operations. He is a former police commissioner in Enugu and was an AIG in charge Zone 5.

Recall that Mohammed was appointed as acting IGP on 15th January 2019 by President Buhari. Following his confirmation, Mohammed is the 20th IGP of the country.