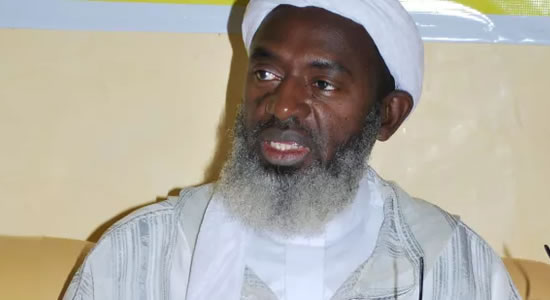 The Kaduna state-based Islamic scholar, Sheikh Ahmed Gumi, has insisted that if Nigeria must make headway in the fight against insecurity, the repentant criminals must be given amnesty. Gumi opined that if those who started a civil war against the country that consumed millions of people were pardoned, he sees no fault in giving similar gesture to bandit if that will bring peace at the end, saying bandits must be forgiven if the government is serious about ending the carnage.

Sheikh Gumi who has been on the self-imposed expedition of reaching out to bandits in their den said if those who wage war against the sovereignty of Nigeria were pardoned, he said he was wondering why some people are opposed to pardoning bandits.

In his statement, “I see no reason why we cannot accept their (bandits) repentance and give them amnesty. You ask why do we give them amnesty but they told us specifically that they are ready to drop their arms and they don’t want to be pursued with legal actions after they repented.

“If the country could pardon coup plotters who committed treasonable offences in the era of military administration, the bandits can as well enjoy similar forgiveness even better under democratic rule.”

The cleric made this statement in reaction to the statement made by the Christian Association of Nigeria (CAN).

He said that the CAN as a body misunderstood him in the mischievous video going round, saying it was doctored by mischief makers and manipulated to suit their narrative against him.

Gumi said that he was not defending the bandits for what they are, they are criminals, but they are ready to give up the crime if the government will drop charges against them, he added.

He recalled that in this country Nigeria, the government have forgiven coup plotters, forgave those who killed and maimed even those that instigated a civil war that leads to the deaths of million Nigerians, therefore said, he sees no reason why is difficult to accept the repentance of this criminals if it is genuine.

The cleric further stated that since it is only the Federal Government that has that leverage of pardoning these people, he said they should do so. He added that his finding revealed that they were also victims at some point, as so many of them were arrested and punished for just looking like herdsmen.

He called on the media to stop sensational reporting to avoid aggravating the security problem as the country is already in flames.

Gumi said, “You should be very careful in what you report. What you see. Continue reporting responsibly and you should not stir the Christian brethren who are known to be peaceful and law-abiding. We have been together for a long and nobody can separate us, we should learn to live together in peace.”