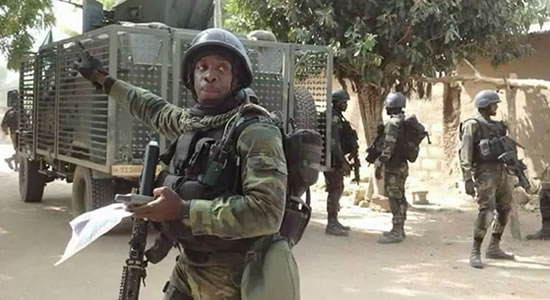 There was wide jubilation in Damboa LGA in Borno state this morning when the Nigeria security forces dealt with the Boko haram insurgents in an early-hours shootout today. According to the report, the insurgents storm the Damboa town in the early morning hours about 6:35 am shooting sporadically into the air from all directions throwing people into panic for safety. However, in a swift response, the security forces engaged them in a shootout that lasted for nearly an hour forcing the insurgents into retreat.

An eyewitness stated that the attackers had to take to their heels when they realised the soldiers were ready for them. He said, “I can confirm to you that Boko Haram insurgents made an attempt this morning but it was not successful, the troops on the ground in Damboa town thwarted it immediately,”.

“The troops did a great job and as we speak now, there is jubilation in Damboa now,” the source said.

Damboa Local Government Area is one of the towns that have suffered several displacements in the hand of the insurgents in the last decade.

The town is strategically surrounded by the Sambisa forest in Borno state, and just about 80km away from Maiduguri town, the state capital.