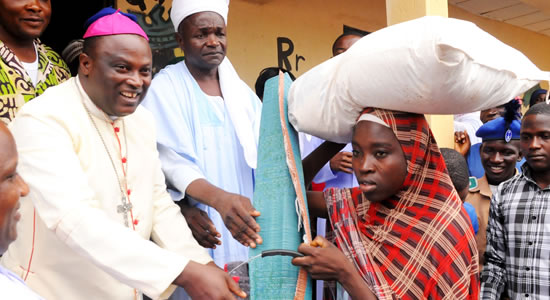 Most Rev. Michael Gokum, the Catholic Bishop of Pankshin Diocese of Plateau, has made donations of food items and N45,000 to Internally Displaced Persons (IDPs) in Bokkos Local Government Area of Plateau.

Some of the items donated include; bags of rice, beans, sugar, garri, among others.

The donation, which was made on Sunday, was facilitated by the Justice Development and Peace Commission (JDPC) of the diocese.

Gunmen recently attacked some communities in Daffo District of Bokkos and left several people dead, with many injured while thousands were rendered homeless.

Presenting the items to the displaced persons on Sunday, Gokum said the gesture was to alleviate their sufferings and give them a sense of belonging.

“We are here to empathise with our brothers and sisters who are affected by the recent ugly happenings in some communities of this locality," Gokum said.

“When such things happen, those affected become helpless; as such will need urgent support to cater for their immediate needs of feeding and shelter.

“So, we have come with a little token and some food items to assist them find succor, pending when they will return to their original places of abode,” he added.

Gokum encouraged the people to always trust and believe in God, and show Him gratitude in every situation they found themselves.

The bishop, however, discouraged the affected community against reprisal.

Rev. Gokum advised them to live in harmony with their neighbours for the good and progress of their communities in particular and the state in general.

He called on the government to strengthen the security apparatus to guarantee safety of lives and property in all parts of the state.

Earlier, Rev. Fr. Bassil Kassam, the JDPC Coordinator in the diocese had commiserated with IDPs and urged them to be prayerful.