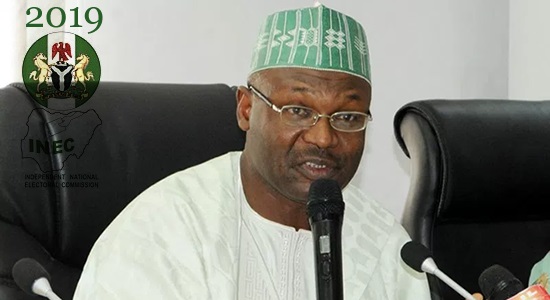 The Independent National Electoral Commission (INEC) has formally released a 33-page regulations and guidelines for the conduct of the 2019 General Elections. Singing the document, INEC Chairman, Prof. Mahmood Yakubu

disclosed that this was done in exercise of the powers conferred on the commission by the Constitution of the Federal Republic of Nigeria 1999 (as amended) and the Electoral Act 2010 (as amended).

Highlights of the guideline include the simultaneous accreditation and voting, which has been opposed by some opposition parties.

The documents which listed incidences that may warrant postponement or cancellation of elections among others, also stated that accreditation and voting would hold concurrently between 8am and 2pm.

The section on the method of voting also prescribed that the Permanent Voters Cards (PVCs) and Smart Card Reader (SCR) shall remain instruments of identification of prospective voters.

“Where the end of tenure of FCT Area Council does not coincide with a General election year, the election to the office of Chairman and Vice Chairman and Councilors of the Area Councils shall hold on Elections to which these Regulations and Guidelines apply,” the guideline reads in parts.

On the method of voting, the guideline said that voting shall be in accordance with the Continuous Accreditation and Voting System (CAVS) procedures as specified in the Regulations and Guidelines, the Election Manual and any other Guide issued by the Commission.

This was vehemently rejected by a coalition of political parties which insisted that the chairman of INEC retains the 2011 and 2015 separate accreditation and separate voting system, which Nigerian voters are familiar with and avoid creating confusion and loophole for massive tampering of result with the continuous/same time accreditation and voting.

The guideline noted that settlement/Voting Point other than the one at which his/her name appears in the Register of Voters and he/she presents his/her PVC to be verified by the SCR, or as otherwise determined by the Commission. It further bars the usage of telephones and other electronic devices capable of taking pictures in voting cubicles.

“Voters may come to the Polling Unit with telephones and other electronic devices provided that they do not take them to the voting cubicles or take pictures of other voters while they are voting,” it said.

The document said voters are free to remain within the vicinity of the Polling Unit to witness the sorting and counting of votes and the announcement of results, provided he/she is orderly.

According to the document, where the total number of votes cast at a PU exceeds the number of registered voters in the Polling Unit, the result of the election for that PU shall be declared null and void, and a report in that regard shall be made to the collation officer.