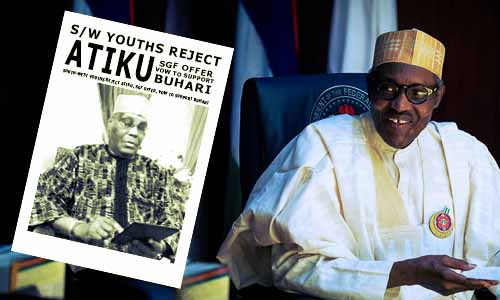 Youths in South-West have rejected Secretary to Government of the Federation, SGF reserved for the region by Peoples Democratic Party, PDP Presidential candidate, Alhaji Atiku Abubakar, saying, the party has never fulfil past pledge made to the region.

The youths under the aegis of Progressive Yoruba Youth Congress, PYYC, were quoted by Vanguard as alleging that the party has constantly shortchanged the region while assigning key position even after making promises publicly to secure South-West support.

National President, PYYC, Mr Kola Salawu at a press briefing in Ikeja, argued that the tears of the region were wiped off by All Progressives Congress, APC in 2015 when it zoned the Vice President candidate post to South West and fulfilled it.

“South West will not go back to oblivion again. And all the good people of the region must rise up to protect this ongoing progress and support the one who has brought development to the region.

“We urge all sons and daughters of the South West of Nigeria to be politically awake and choose wisely in the forthcoming elections as the decisions we make will determine if the region will continue to enjoy the true benefits of good governance or we go back to the days of total neglect.

“Let us not forget that the neglect by the PDP was not only political but also infrastructural. The party for whatever reason barely completed or even carried out any major project in the South West. “The Lagos – Ibadan expressway, the busiest in the country was abandoned. The Benin – Ore expressway was equally abandoned, so also was the Oyo- Ogbomosho road, there was barely any federal presence in the South West.

“We must also remain politically vigilant. When President Buhari’ s tenure ends in 2023 after he wins the 2019 elections, power will return to the southern part of Nigeria and that is just some four years away.

“We never can tell what will happen then as the highest ranking person in this government from the south is no other but His Excellency the Vice President, Prof Yemi Osinbajo. It may just be his turn,” Salawu added.