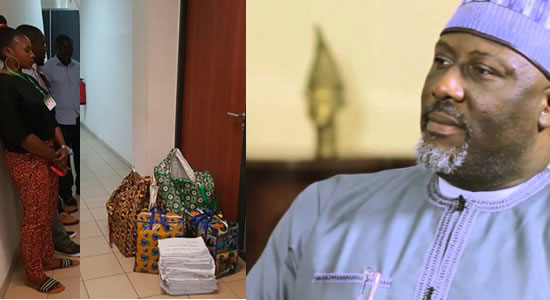 Kogi West Senator, Dino Melaye has described the ruling of the Election Tribunal which on Friday nullified his election as a miscarriage of justice.

Melaye stated this in a statement he personally signed and made available to journalists in Abuja on Friday.

News Agency of Nigeria (NAN) had earlier reported that the tribunal sitting in Lokoja invalidated Melaye’s victory in the March 22 election and ordered for a fresh election.

Reacting to the judgment, Senator Melaye said the decision of the tribunal was based on information that was alien to the fundamental matters brought before it.

“The judgment is full of importation of information that is alien to the case. I, however, commend the courage and moral strength of the chairman of the tribunal for resisting evil and standing on the part of justice.”

Speaking on his next step, the Chairman Senate Committee on Aviation revealed that he would take his case to the appeal court where he believes his mandate will be reclaimed.

“I have confidence in the appeal court to right the wrongs as contained in the pronouncements of the judgement. I also want to tell those jubilating that their jubilation will be short-lived while appealing to my teaming supporters to remain calm as their mandate is safe and secured and cannot be taken through any mischievous means. “However, Our legal team is already working on appealing the judgment and I assure all that justice will prevail.”