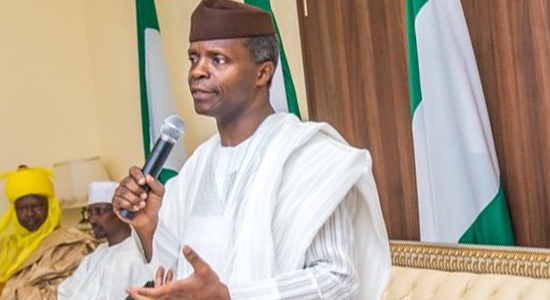 Acting President Prof. Yemi Osinbajo has urged parents and guardians of the kidnapped Lagos School boys not to lose hope on the return of their wards.

This is even as he assured that the Federal Government in collaboration with state authorities are working tirelessly to ensure their safe return.

On May 25, six secondary school boys of the school were abducted by unknown gunmen; this is even as four students and six staff of the same school were also kidnapped in October 2016.

In a chat with newsmen on the sideline of the birthday thanksgiving service of Pastor Salami Ololade in Lagos on Sunday, the Acting President said though “it is very a traumatic experience for the parents, there should be no doubt at all about the commitment of government.’’

According to Osinbajo, “ I don’t know how many times the governor has spoken to me about this and the police the Inspector General, the Commissioner of Police, the DSS and even the Armed Forces.’’

“I am sure these children will return as quickly as possible, so we look forward to their return.’’

On the conduct of school children on holiday, Prof. Osinbajo “advised children who are on holidays to learn something new’’.

He said: “because it is a long holiday, it is a great time to do something new. Those who like to learn a skill whatever skill that may be, I wish that when I was growing up I learned even carpentry.’’

He said school children on holiday can learn something new that would impact their lives and those of their communities in new fields of technology.

News Agency of Nigeria, NAN, reports that the Acting President had earlier attended the anniversary service of the Trinity House, Lagos, before joining Pastor Salami Ololade for his 60th birthday thanksgiving service.