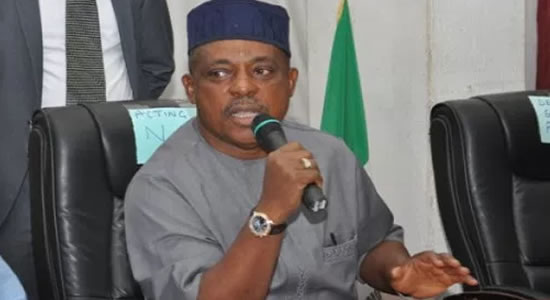 The Peoples Democratic Party (PDP) on Friday, raised alarm over alleged plot by the Supreme Court and the ruling All Progressives Congress, APC to remove its governors through the apex Court. The National Chairman, Uche Secondus, raised the alarm while addressing party leaders at the 87th National Executive Committee, NEC, meeting in Abuja. He said the National Working Committee, NWC, had credible intelligence that the Presidency and APC leadership were still arm twisting the judiciary.

“They are working to ensure they deliver to them four PDP won states of Sokoto, Benue, Bauchi and Adamawa while keeping states like Kano we clearly won for them”, the chairman noted.

“We have demanded that the seven Justices that participated in the Imo judicial fraud should recuse themselves from the remaining cases involving the PDP. We know that the APC and President Buhari have taken our civility for weakness and inability to act.

“The Presidency has even abandoned governance amidst myriads of challenges in the land and prefers to be joining issues with us as main opposition party, a deliberate policy to divert attention from their inept leadership.

“We have made it abundantly clear that since they have chosen to make injustice law using the highest court in the land, the Supreme Court they should be ready to embrace the consequences of their actions.

“Your Excellences, great leaders of our party, the 3rd President of America Thomas Jefferson said that “when injustice becomes law, resistance becomes duty This is the point we are now as the APC is using the highest court in the country to legitimize injustice.”
There is anxiety in the PDP that there may be a repeat of the Imo tussle outcome.

The Supreme Court, in a unanimous judgment on Tuesday, sacked Emeka Ihedioha as Governor and declared Uzodinma of the All Progressives Congress (APC) as the winner.

The judgment delivered by Justice Kudirat Kekere-Ekun held that the candidate of the APC won on grounds that he polled majority of the lawful votes cast at the election.

Kekere-Ekun said with the result from the 388 polling units, the APC governorship candidate polled majority lawful vote and ought to have been declared winner of the election by INEC.