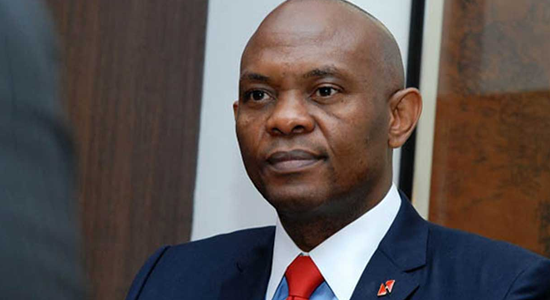 Leadership, Difference Between A Nation’s Poverty And Prosperity – Elumelu

Nigeria’s influential businessman and philanthropist, Tony Elumelu has described leadership as the sole difference between poverty and prosperity in a country. Elumelu made the remarks as guest speaker at a lecture delivered on Tuesday, to senior officers at the Armed Forces Command and Staff College, Jaji, Kaduna.

The lecture titled “Leadership: Private Sector Perspective ” had about participants including senior military officers from the rank of Major and equivalent, of the Nigerian Army, Navy and Airforce, and their instructors.

“It is the difference between poverty and prosperity,” Elumelu said.

The guest speaker expressed his conviction that leadership is the reason why a country that is not endowed enjoys prosperity, while the one that is greatly endowed lives in poverty.

Addressing the common question about whether leaders are born or made, Elumelu said: “Leaders are made and not born. Although certain factors shape whether a leader succeeds, these factors are not necessarily destiny-driven factors. Those who succeed are driven by a mission, they prepare for leadership.”

Mr. Elumelu’s commitment to leadership is perfectly illustrated in his own professional accomplishments. In 1997, aged 34, he assembled a group of other young professionals to take over a distressed bank. Within 8 -10 years, they grew the bank to a position to merge with the 3rd largest bank in Nigeria at the time. Going beyond Nigeria to Africa, United Bank for Africa (UBA) has now become a pan-African bank in 19 African countries and global footprint in key financial centers of the world – Paris, New York, and London.

Continuing, the Chairman, Heirs Holdings, called on leaders in both private and public sectors to consider legacy, “Leaders who succeed are those who think about legacy, who are concerned about how history would judge them. They understand that leadership opportunities don’t last forever. As a continent endowed with so much we must raise the standard of living of our people through conscientious leadership.”

Through the Tony Elumelu Foundation, Elumelu has endowed US $100million to fund, train and mentor 10,000 African entrepreneurs from across all 54 countries of the continent.

As for the most important attribute of leadership, Elumelu shared: “You must get the people equation right. Leadership is about instilling confidence in people. You work and deliver results through people and if those people are positively mobilized you will succeed.”

“Your conglomerates and multinational corporations present in twenty African countries and in so many strata of businesses ranging from the financial sector, oil, and gas, real estate are a testament to your expertise on leadership.

“By your coming here today, you have made so many leaders out of our students,” the Commandant enthused.

In a vote of thanks, Major Zeigbo, a course participant at the College, thanked the guest speaker and assured participants would “put to use the leadership tips learned during the course and in all future endeavors.”