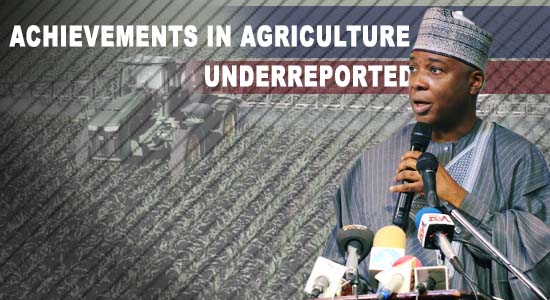 The President of the Senate, Dr Bukola Saraki, said that the government of the All Progressives Congress (APC) had recorded tremendous achievements in agriculture. He told the News Agency of Nigeria (NAN) in Abuja on Sunday, that the feats of the party in agriculture were, however, not adequately reported. He berated some media houses for always making headlines with negative stories while ignoring such success stories.

The President of the Senate noted that in the area of rice farming and processing, Nigeria under the APC government had risen to a point where it would soon be completely self-sufficient.

“Am sure in a few years time we will be self-sufficient in rice and that is a major achievement for a country that is always importing rice to now get to the stage where we no longer have to import rice.

“But the point I am making is that some of these things that we have done in agriculture, I am happy to see that there are a lot of successes,” he said.


Recalling the poultry farm he established during his tenure as governor of Kwara, he said that the farm had grown to be the second largest poultry in Nigeria but was not being reported.

Saraki said that the farm was a true example of a success story, adding that with its current growth rate, it would soon become the largest in Africa with many international companies buying into it.

“That farm today is probably the second largest poultry farm in the country and probably in another three years, it will be the third largest in West Africa.

“Recently the farm was bought into by the largest poultry farm in South Africa.

“If you go to the community around there, you will see a lot of small scale industries that have picked up and small scale farmers also. It has been a great success.

“The problem sometimes is that some of you in the media, you don’t like going beyond Lagos and Abuja.”

The President of the Senate, however, warned that the success story of the APC government in agriculture and those of other states and individuals would amount to nothing if smuggling was allowed to thrive.

He said that while the government was working hard to ensure self-sufficiency in various aspects of agriculture, smugglers were hampering government's efforts.


He, therefore, called on all agencies concerned to immediately step up their game and end smuggling in Nigeria.

“I was in the farm recently with the governor of CBN and what we saw there was very impressive, the only thing they (farmers) are still having problems with is the issue of smuggling.

“People are still smuggling chicken and that is our biggest challenge.

“The same thing with rice, we have been working and taking on Customs that they need to do something about these issues.

“We had to give the management of Customs all the support we have to make sure that they must do something about smuggling.

”Once we can address smuggling, I think it is the greatest challenge to our success in agriculture.”