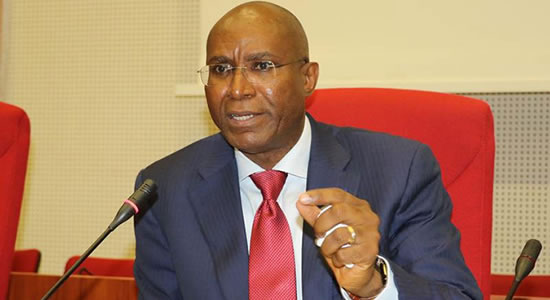 Constitutional Review: Report To Be Presented In July – Omo-Agege

The chairman of the Senate Committee on Review of 1999 Constitution, Ovie Omo-Agege, has disclosed that his committee report on the constitutional review would be presented to the national Assembly latest by July. Omo-Agege applauded the national Assembly for swiftly approving all funds that were required by the committee to facilitate the quick action the document received.

The Chairman of the committee who is also the Deputy Senate president stated this yesterday while conducting a press conference in Abuja. He explained that though his committee is still utilising the fund appropriated to it in the year 2020 budget, acknowledged that funding was never a problem in the whole process of the assignment.

In his statement, “In the 2021 Budget, we have not received an appropriation yet. I believe it was an oversight. So we are still working with the 2020 Budget.

“We are hoping that during the supplementary exercise, we will be accommodated,” Omo-Agege added.

According to him, his committee has received over 250 memoranda which so far have all been analysed.

“The committee has held several consultations and meetings to deliberate on the process and submissions in preparation for the public hearings at the national and zonal levels.

“Following from the analysis of the memoranda submitted, the issues have increased from 13 to 16, including Gender Equity/Increased participation of Women and Vulnerable Groups in governance, the Federal Structure in governance and Power Devolution, among others.” He explained.

The chairman committee revealed that the zonal public hearing would be concurrently held at the same time in all the geo-political zones on Wednesday, May 26th and Thursday, 27, 2021.

To ensure that the participation attracts many audiences the chairman committee revealed that two venues are being slated in each of the geo-political zones.

Subsequently, there is going to be National Public Hearing to be held in Abuja on June 3rd to give the opportunity to other stakeholders who could not attend the zonal hearing to contribute their voice.

“What we are seeking to do is to collate views of members of the public on their positions on respective submissions already made, Omo-Agege added.

“The chairman of the North-central zone, Sen Abdullahi Adamu is standing in for me in that centre.

“He is standing in for me at the centre. His job like any other chairman is to collate these views, prepare reports and bring all of those to us as a committee. We will take a look at it, meet with our consultant and based on these reports, we will reduce those collations into bills that we take before the Senate.”