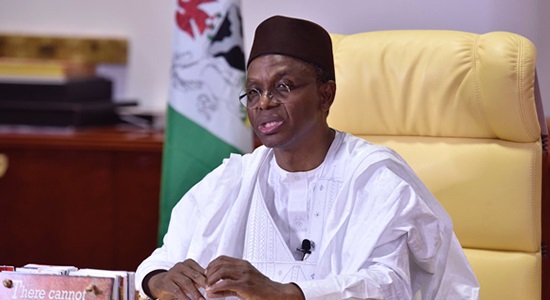 States Should Decide Their Model Of LG ― El-Rufai

Governor Nasir Ahmad El-Rufai of Kaduna state has said that each state of the federation should decide the model of democratic local government that best suits it because Nigeria is a federation of 36 states and the Federal Government. According to him, listing the 774 Local Governments in the Constitution and trying to establish for them direct relations with the Federal Government violated the spirit of federalism.

The Governor spoke at the public hearing of the Senate committee on the review of the 1999 constitution on Wednesday, adding that each state should decide how many local governments it can efficiently run and fund for better governance and delivery of public goods.

He said each state should decide what typology of local governance fits its historical, cultural, and administrative circumstances, but the resulting framework must be democratic, with periodic elections at no longer than four-year intervals.

He argued that devolution of powers is necessary because the current structure overburdens the federal government with too many responsibilities which it cannot efficiently handle.

The governor further said that the APC Committee on True Federalism which he headed, had identified legislative interventions that the National Assembly can more easily undertake to achieve a truly balanced, equitable, and fair federal structure. He revealed that ‘’we also drafted bills to alter the constitution and amend or repeal existing legislation to achieve the overall objective of true federalism.’

In his personal capacity, the governor proposed 10 items that should be shared responsibilities between the state and federal governments. El Rufai argued that ‘’the reality of our security situation today requires that Nigeria must strengthen its military and security agencies. This includes decentralizing the police to enable the states to exercise effective control in securing their residents and communities.’’ ‘’ We need to have federal, state and community police, with each granted sufficient powers to make them effective in securing the areas assigned to them and cooperating closely with each other’’, he further said.

According to him, ‘’those expressing concerns about the ability of the states to bear the cost of policing should realize that apart from the payment of salaries by the federal government, most of the operational and capital costs of the Nigeria Police are borne by state and local governments.’’ The governor argued that fear of abuse of State Police by sub-national governments is misplaced because a constitutional or statutory framework can be enacted to ensure federal intervention in cases of such abuses.

El Rufai also said that the constitution should be altered to remove the Police Service Commission because it is an unnecessary hindrance to effective policing in Nigeria. ‘’ The power to hire and fire police officers should revert fully and totally to the Inspector General of Police, under the supervision of the National Police Council, as envisaged by the Constitution,’’ he advocated.

The governor recommended that all ‘’mineral resources, including oil and gas and solid minerals, in the states, which will, in turn, pay royalties and taxes to the Federation Account.’’

‘’States already control land within their territories, courtesy of the Land Use Act, which is incorporated into the Constitution by reference,’’ he argued. According to him, ‘’one of the reasons why mining has not quite taken off in our country is because of the dichotomy and total disconnect between the federal institution that issues licenses for mining and the state agencies that ultimately control not only the land and title thereto but any approval to undertake any development on the land.

The constitutional amendment should clarify that the states can establish courts to exercise jurisdiction at first instance, or on appeal on matters for which the states can make laws.

‘’ In essence, I am suggesting that judges of State High Courts, Sharia Courts of Appeal and Customary Courts of Appeal should be nominated by the State Judicial Council, subject to confirmation by the House of Assembly,’’ he said.

El Rufai further said that states should also be enabled to establish State Courts of Appeal, similar to what we used to have at the regional level under the 1963 Republican Constitution. ‘’The State Court of Appeal will entertain appeals from State High Courts, Customary and Sharia Courts of Appeal, on matters on which the State House of Assembly is empowered by the Constitution to make laws.

‘’ This arrangement will make our judicial processes faster, encourage competition, deepen our jurisprudence and restore citizens’ trust. It will also significantly reduce the burden on the Federal Court of Appeal and the Supreme Court of Nigeria,’’ he added.

The governor argued that each state should decide the model of democratic local government that best suits it because Nigeria is a federation of 36 states and the Federal Government. ‘’Listing the 774 Local Governments in the Constitution and trying to establish for them direct relations with the Federal Government violates the spirit of federalism.

‘’Each state should decide how many local governments it can efficiently run and fund for better governance and delivery of public goods. ‘’Each state should decide what typology of local governance fits its historical, cultural and administrative circumstances, but the resulting framework must be democratic, with periodic elections at no longer than four-year intervals,’’ he added.

El Rufai also said that ‘’adopting this proposal means that the revenue allocation formula will specify what proportion of federation transfers is for the local governments.’’ ‘’No state government shall be allowed under any guise to take control of local government funds, and the Constitution should entrench safeguards and sanctions, including withholding state funds due from the Federation Account in the event of any reported diversions, impoundment or misappropriation’’, he said.

The governor recalled that the APC Committee on True Federalism’s recommendations are clear, not controversial and simply conform with common sense. ‘’For instance, why should the Federal Government be enabled by the Constitution to fix a national minimum wage that it can afford but most of the states, has been unable to implement? ‘’For the records, Kaduna State is the first government to pay the national minimum wage approved in 2019, with consequential adjustments of up to 66% for most state civil servants. ‘’A minimum wage is certainly desirable to protect citizens from exploitation, but it should be on the Concurrent List due to variations in the cost of living and ability to pay,’’ he added.

According to him, the proposed constitutional amendment will enable the Federal Government to legislate a minimum wage for federal employees and those who reside and work in the FCT. In his remarks on the occasion, Senator Uba Sani representing Kaduna Central said the zonal public hearing expanded and deepened the people’s participation in the constitutional reform process.

He said When the people are fully involved, they will own the process, legitimize it, and defend its outcome. “I am highly impressed with the quality of discussions at this zonal public hearing. We have also put forward key proposals for consideration by the Senate, and indeed the National Assembly. Our sincere appreciation goes to the Deputy Senate President for his well-articulated and highly illuminating address.

His address was unique as always because of the novelty of ideas as well as style. We greatly value your contribution, sir.” “We have also listened to the powerful and thought-provoking remarks by our Special Guest of Honour, the innovative and resourceful Governor of Kaduna State, H.E. Nasir Ahmad El-Rufai. I would like to avert the attention of the distinguished members of this committee and all legislators here present to the recommendations contained in the Report of the True Federalism Committee, which His Excellency Governor Nasir Ahmad El-Rufai chaired.

The Report was drafted excellently, and it highlighted draft legislation that lawmakers may choose to sponsor,” he said. Uba Sani said there is no better time to pass laws regarding State Police, State Judiciary, Resource Control, and Revenue Allocation in favor of the States. “Such laws are paramount to bring development closer to the people.

Esteemed citizens, the time is now, and we must be deliberate in our action to ensure we create a sustainable Nation that will stand and prosper for generations to come,” he said.

Earlier in his address, Deputy President of the Senate and Chairman, Senate Committee on Constitution Review, Senator Ovie Omo-Agege, said those who have followed previous Constitutional Review exercises, may be wondering why these Zonal Hearings are coming ahead of the National Public Hearing. “The reason is not farfetched; the Senate has decided to adopt a bottom-top approach by first listening to Nigerians at the geopolitical level.

“This approach underscores the critical importance the Constitution Review Committee places on the subnational levels of governance in Nigeria. Surely, and without a doubt, the success of the Committee’s review process will be dependent on your beneficent support and partnership.

You are indeed the pillar on which the Committee’s work is to be anchored. That is why we deem it prudent to meet with you first. In other words, this exercise is your exercise and I implore you all to embrace and own it.”

“At the commencement of this 9th Senate, we had set for ourselves a legislative agenda as a basis on which we are to be assessed. Sitting prominently in that agenda is the need to address, by way of Constitutional Amendments, topical issues like Judicial and Electoral Reforms, Local Government Autonomy, and devolution of powers. You will agree with me that if we get those items through constitutional processes of alteration successfully then our Constitutional Democracy will be set on the right pedestal, and ultimately, Nigeria will take its pride of place among the enviable constitutional democracies in the world.

It is therefore with great pleasure that I convey the intention of the Senate to leverage on this constitutional review exercise to achieve as many milestones as possible in one fell swoop.”

“Let me also remind our fellow patriots, countrymen, and women, that a Constitution Review represents a critical phase in our development and advancement as a nation.

So far, we have had over two decades of constitutional rule, under the 1999 Constitution. This is an important feat, and we commend ourselves as a country, even if we are not where we aspire to be.

As a living document, the Constitution, and to a large extent, our constitutional democracy, needs to be reviewed from time to time. Just as in our day-to-day lives, we take stock of the past and plan for the future, so it must be with the nation.

Indeed, this ongoing review provides a platform for the good people of Nigeria to express their opinions on the fundamental law that governs our lives through proposals that will lead to the highest good for the greatest number of our people,” he said.