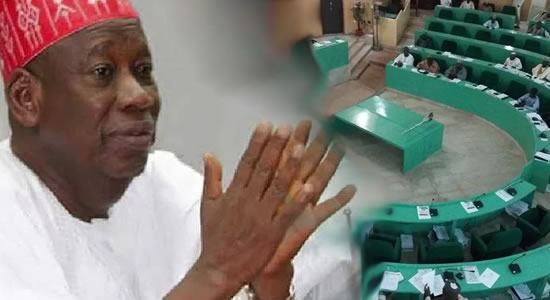 A High Court sitting in Abuja has today declared null and void, the congresses convened by Governor Ganduje faction of the All progressive Congress (APC) in Kano state. Accordingly, the presiding Judge, Justice Hamza Mu’azu upheld the congresses conducted by, Senator Ibrahim Shekarau-led faction of the APC to be the authentic. For some time now, Governor Ganduje and former Governor Shekarau both from Kano have lock horns over who controls the APC party in the state.
The court ruled that the congress which returned 17,908 members remain the valid congress in the state, and an order restraining Ganduje faction from appointing a new executive was also issued. During the congresses that took place on October, 16 in Kano, the Ganduje-led faction returned, Alhaji Abdullahi Abbas as its chairman while, Shekarau faction recognised, Alhaji Haruna Ahmadu Danzago as its chairman.

The National appeal Committee set up by the APC to consider disagreement from the congress recognised the Ganduje faction as the authentic chairman of the party in the state.

However, Danzago rejected the position of the appeal committee which was headed by, Dr. Tony Macfoy. Saying, “The APC national headquarters is yet to recognise anybody, but will do so on the day they will give out certificates to genuine elected APC leaders.

Danzago added, “I did not contest the election alone; three other aspirants contested along with me, unlike their own where only Abbas contested and returned unopposed. No problem; when we reach the bridge, Allah will show us the way to cross it.”

Following the outcome of the ruling, Danzago factions were seen jubilating saying the rule of law has prevailed.