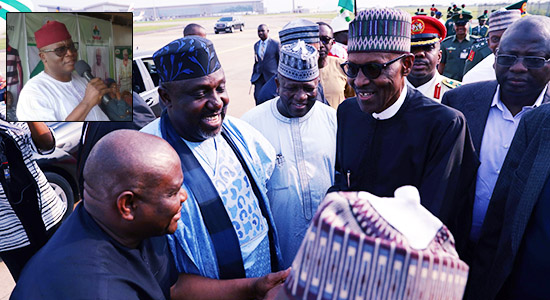 In a rare show of fraternal goodwill rather than acrimonious politicking, the Peoples Democratic Party (PDP) has expressed its conviction that President Muhammadu Buhari, who returned to Nigeria after a prolonged medical vacation abroad, is now healthier.

The PDP disclosed this in a statement issued on Saturday and signed by the National Publicity Secretary of the party, Prince Dayo Adeyeye.

The party expressed its happiness at the President’s return and hoped it will translate to the improved economic well being of Nigerians.

“The PDP joins other Nigerians to welcome back the President, Commander-in-Chief of the Armed Forces of the Federal Republic of Nigeria, Muhammadu Buhari from his medical sojourn in London for over three months.

“The President departed Nigeria on 7th of May, 2017 for an ailment and returned today being August 19, 2017. We believe that Mr. President is healthier now to assume his responsibility at the helm of the Country’s affairs.

“We thank the Almighty for saving his life and pray that he grants him better health and understanding on how to rescue our poor economy and relieve Nigerians from the current hardship,” the party said in the statement.