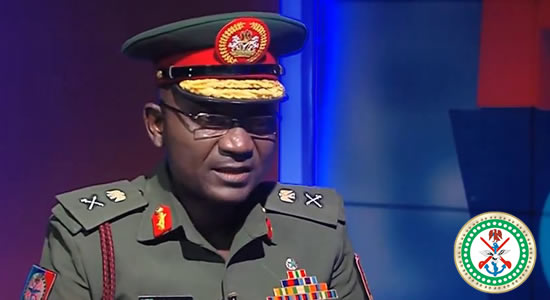 The Defence Headquarters (DHQ) has alerted the public to the existence of fake twitter handle on Defence “@DefenseMonitor” currently trending. Maj.-Gen. John Enenche, the Director Defence Information (DDI), in a statement said that effort was underway to tract perpetrator of the fake twitter handle “mischievously’’ using Defence logo and already posting tweets.

“The twitter handle is mischievously using the Defence logo and posting tweets as though they are emanating from the Defence Headquarters.

“The tweets have started attracting reactions from unsuspecting members of the public.

“The DHQ hereby call on patriotic citizens of our nation to disregard the twitter account and ignore the tweets, while the effort is underway to track the perpetrator of this heinous act.

“People are advised to be conscious of increase in the number of fraudsters who will go at any length to misrepresent the military and its institutions, sometimes using such channel to swindle innocent members of the public.

“Please be guided,’’ the DDI said.

The twitter handle has since been suspended and pulled down.