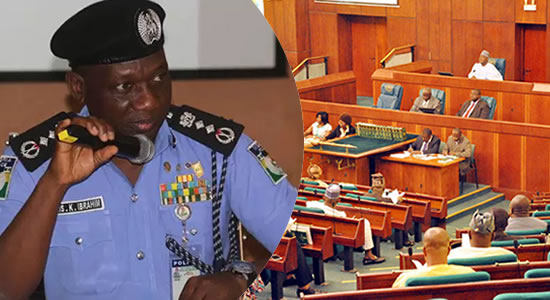 The Inspector-General of Police, Mr Ibrahim Idris, has filed a suit against the Senate President, Dr Bukola Saraki, and the Senate Committee on Ethics and Privileges. This comes amid allegations of corruption in the Nigeria Police Force made by the lawmaker representing Bauchi Central Senatorial District, Senator Isa Misau.

Senator Misau had among others alleged that the Inspector-General of Police collects gratification from policemen attached to private citizens and oil companies, claims police authorities denied but accused the lawmaker of deserting the force. This had sparked up controversies across the country with the police boss investigating the corruption allegations in the force, and the Senate also setting up an ad hoc committee to investigate the allegations against the IGP.

Mr Ibrahim, however, approached a Federal High Court in Abuja on Thursday, seeking a declaration that the committee set up by the Senate to investigate the allegations levelled against him are null and void. He also asked the court to declare that the seating and other conducts of the committee to investigate such allegations against him was unconstitutional, null and void.

The Senate, had last week, resolved to investigate allegations against the police boss after Senator Missau accused him of breach of public trust, mismanagement and misappropriation of funds belonging to the Nigerian Police. The case is yet to be assigned to a judge.