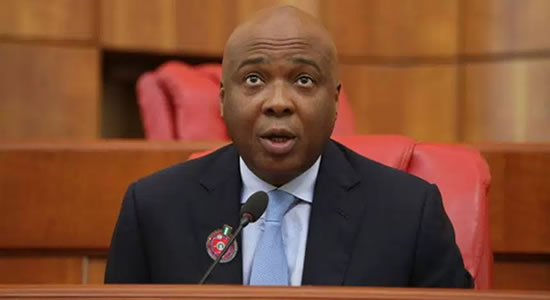 Unity Must Exist Before We Talk About Restructuring – Saraki

Senate President Bukola Saraki has asked advocates of restructuring in Nigeria to prioritize the unity of the nation. This, according to him, is because there must be unity before talks about the structure of the country can be held.

The Senate President said this on Saturday at the Southern Senators Forum’s retreat in Calabar, the Cross River capital.

“Indeed, unity must exist before we can even talk about restructuring or reform,” Saraki said, adding, “One of my messages to you today as I declare this retreat (open) is, how do we stay together? How do we deliver on the task entrusted to us at this critical time?”

Saraki, however, called for focus on unity.

“The only way for us to see ourselves is, first and foremost, as Nigerians; not as language, not as tribe, religion or region or any other consideration out there that serves to deflect our attention from national unity. We must see ourselves as Nigerians first,” he said.

The Chairman of the Forum, Senator Hope Uzodinma, told those at the retreat that its aim is to find solutions to issues threatening the nation’s unity.

“We in the Southern Senators Forum are using this unique platform to arrive at the surest and the most peaceful means of achieving national unity on all issues capable of destabilising our polity,” he said.

“A clamour for the restructuring of our federal structure is on the front burner at the moment. However, the Southern Senators Forum has an equal stake in every national, political, and economic challenge. As legislators, we cannot afford to be indifferent to any national issue.”

The host, Governor Ben Ayade of Cross River, who is a former Senator, said the retreat is timely as it addresses many concerns.

He commended the forum for discussing major issues in the country, especially restructuring, stressing that it is the duty of elected officers in the country to create a direction and provide the focus it needs to thrive.