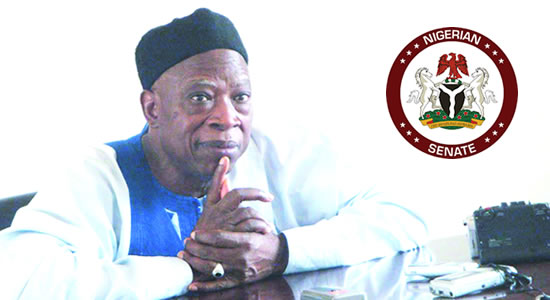 The National Chairman of the All Progressive Congress, APC, Senator Abdullahi Adamu has cautioned, Bashir Machina over his insisting on dragging the Yobe North Senatorial district ticket with the Senate President, Ahmed Lawan The APC ticket for the Yobe North Senatorial district has sparked controversy after Machina, who won the primary election in the district was denied the ticket by the APC after making made it clear that he will not step down for Ahmed Lawan.

Lawan participated in the primary election but lost to Machina.

In a dramatic twist, when the APC submitted names of successful candidates to the Independent Electoral Commission (INEC), Machina's name was omitted in favor of Ahmed Lawan.

In his defense, Abdullahi Adamu insisted that Ahmed Lawan had participated in the primary election in the district and the party has listed him as the preferred candidate for the district which was submitted to INEC.

In his interview with BBC Hausa yesterday, Adamu said, “If you don’t know how to set a trap for a thief, the thief will set the trap for you. Machina should be careful; his issue is getting out of hand. As far as I am concerned as chairman, my party did not violate any law.

This means, Machina has been set up and there is nothing he can do about it.

Adamu added, “Is there any law that says you cannot contest for a position after contesting for another one? No law prohibits anyone from doing so.”