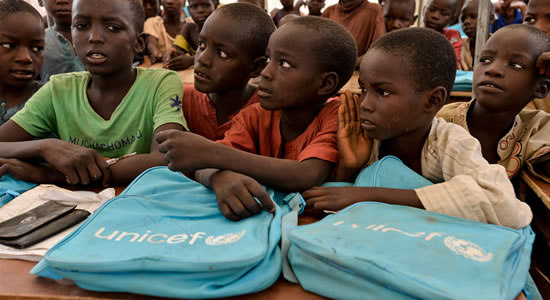 The United Nations Children’s Fund has said most schools in the Northeast remain shut since the Boko Haram insurgency started in 2009, UNICEF said in a statement issued by its Deputy Executive Director, Justin Forsyth and released to newsmen. The UN agency blamed the insurgents for target education; it said that over 2,295 teachers lost their lives, while nearly 1400 schools have been destroyed in the eight years of fighting, the statement added.

The agency noted that over 57 per cent of schools in Borno State, the worst-affected by the crisis, may remain closed in the 2017/2018 academic session. The statement read, “Almost 1,400 schools have been destroyed with the majority unable to open because of extensive damage or because they are in areas that remain unsafe. An estimated 3 million children are in need of emergency education support.

“Children in northeastern Nigeria are living through so much horror. In addition to devastating malnutrition, violence and an outbreak of cholera, the attacks on schools is in danger of creating a lost generation of children, threatening their and the countries future.

“Some children living in camps for the displaced in Borno State, are, however, actually benefiting from education for the first time in their lives. In the Muna Garage camp on the outskirts of Maiduguri, for example, an estimated 90 per cent of students were enrolled in school for the first time.

“In the three most-affected states of northeastern Nigeria, UNICEF and partners have enrolled nearly 750,000 children in school this year, establishing over 350 temporary learning spaces, and distributing almost 94,000 packs of learning material that will help children to get an education.”

The UN agency also said it has started working with partners to rehabilitate schools and classrooms, as well as train teachers to build a stronger education system for the future.

During a three-day visit to Maiduguri, Forsyth was said to have met with families and children affected by the conflict who told him of their fear and the dire conditions they faced while living under the Boko Haram insurgents.

“To date, nearly 1 million children have been displaced by the crisis and 450,000 children under the age of five are expected to suffer from severe acute malnutrition this year. The use of children as human bombs – close to 100 so far this year – has sown a climate of mistrust among communities in the North East, and a cholera outbreak has affected more than 3900 people, including over 2450 children.

“UNICEF’s life-saving emergency programmes in northeast Nigeria remain underfunded. With only three months left in the year, UNICEF has a 40 per cent finding gap in its needs for 2017,” the statement added.