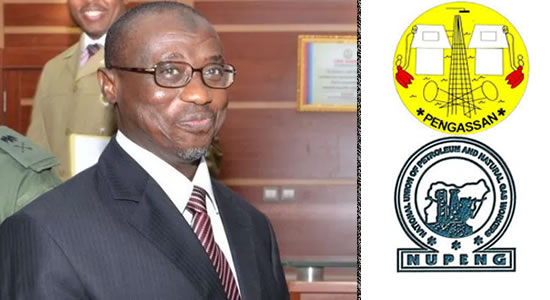 The Unions in the oil and gas sector pledged support for the ‘transformation stride’ of the Group Managing Director (GMD) of the Nigerian National Petroleum Corporation (NNPC) Dr Maikanti Baru. The Petroleum and Natural Gas Senior Staff Association of Nigeria (PENGASSAN) and the Nigeria Union of Petroleum and Natural Gas Workers (NUPENG) made the pledge in Abuja in a statement by Mr Ndu Ughamadu, NNPC Group General Manager, Public Affairs Division.

The National President of PENGASSAN, Mr Francis Johnson, said the unions and its members considered it appropriate to rally round Baru and the NNPC Management to pledge their support.

”The unions’ support for the GMD was based on his ability to walk his talk since assuming office last year. The National body of PENGASSAN and all the NNPC in-house unions are here today to show our support for you. You have brought stability to the NNPC and we are happy today that staff morale is high. You were Chairman of NNPC Anti-Corruption Committee for over five years and that was what informed your appointment as GMD of NNPC. Today, all the bullets you are taking are on behalf of members of staff. We will continue to pray for you, God will continue to guide and shield you,” Ughamadu quoted Johnson."

The Minister of State for Petroleum Resources, Dr Ibe Kachikwu had accused Baru of flouting contractual agreements, creating a fear culture in the corporation and insubordination among others. Ughamadu, reacting to the allegations, however, said the Minister’s allegations were not true as due process had been followed in the corporation’s various activities. Ughamadu said the unionist called on Nigerians to be cautious of their comments on the controversy, adding that any wrong information was capable of discouraging investors from the oil and gas industry.

He said the NNPC Group Chairman of PENGASSAN, Mr Sale Abdullahi, who also spoke during the solidarity visit, disclosed that part of the unions’ concern had to do with the need to protect not only the GMD but the NNPC as an institution.

”Baru had streamlined the processes and procedures in the Corporation leading to full restructuring which was beginning to yield positive results. Today, the GMD and NNPC Management receive inputs from staff and this gesture by Dr Baru has given members of staff a sense of belonging. Our inputs are being implemented and we are highly motivated,” said Abdullahi.

Other union leaders who were at the meeting to lend support were the Group Chairman of NNPC NUPENG, Udofia Benjamin and Chairman of NNPC Corporate Headquarters Chapter of PENGASSAN, Mathew Duru. Also speaking, Baru described the allegations of award of contracts without regard to due process as unfounded and unfortunate.

He explained that as a former chairman of the NNPC Anti-Corruption Committee, he would be the last person to breach the procurement process by disregarding extant laws and rules. The GMD said both the NNPC Act and Public Procurement Act vested procurement powers on the NNPC Tenders Board, the President and the Federal Executive Council (FEC) depending on the cost threshold, stressing that the NNPC Board had no role whatsoever in the process.