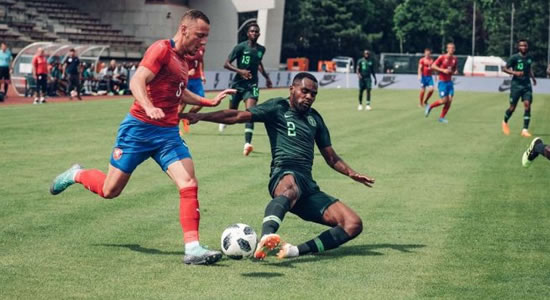 The Super Eagles lost their second straight game as they went down 1-0 to Czech Republic in their final World Cup warm-up game at the Rudolf Tonn Stadium, Austria on Wednesday.

This is the second time Nigeria will face Czech Republic. Their first meeting was at a four-nation tournament, the King Hassan II International Cup, in 1996 with Czech Republic winning 2-1.

Wednesday’s game saw the return of Wilfred Ndidi who missed the Super Eagles last two friendlies and gave a good account of himself.

They will open their campaign in Russia against Croatia in Group D in June 16.

The Super Eagles had the first big chance in the game on six minutes through Victor Moses but his well-taken free-kick close to the edge of the Czechs box was saved by Tomas Vaclik in goal.

In the 19th minute Francis Uzoho made a superb save as he palmed a volley away from range inside the box.

Czech took the lead in the 25th minute through Kalas who slammed in a rebound after Uzoho had saved an initial header from a cross.

The Super Eagles almost drew level on 28 minutes but John Ogu did not connect properly with a corner.

Marek Suchy should have doubled Czech Republic’s lead on 30 minutes following a mix-up in the Eagles’ defence only to hit his effort just over the bar with Uzoho to beat.

The Eagles responded a minute later through Odion Ighalo but his left-foot shot was palmed away for a corner by the Czech keeper.

In the 36th minute, the Super Eagles went close again as Ndidi tried a long range strike which the Czech keeper palmed away for a corner.

At the start of the second half the Super Eagles made a substitution with Tyronne Ebuehi replacing Shehu Abdullahi.

The game was halted in the 60th minute due to heavy rain.

On resumption 10 minutes later, the Super Eagles almost took the lead but the Czech keeper stopped a header from a corner from sneaking in.

After weathering the Super Eagles pressure Czech Republic almost went 2-0 up on 80 minutes but Uzoho made two good saves to keep the scoreline at 1-0.
CompleteSports