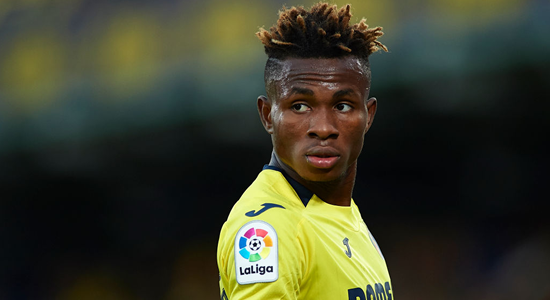 Nigerian youngster Samuel Chukwueze has on Monday, 21st October, 2019 been nominated for one of the most prestigious awards for players under the age of twenty-one (21) "the Kopa Trophee" organized by France Football.

The Super Eagles player and Villarreal of Spain were shortlisted alongside other top players like Vinicius Jr, Matthijs DeLigt, Jordan Sancho, and Joao Felix. The shortlist for the Kopa Trophee was made alongside the list of nominees for France Football’s prestigious award, the Ballon d’Or.

Vigil360 gathered that this is the second edition of the award and Samuel Chukwueze looks forward to becoming the second player to win it after Kylian Mbappe won the maiden edition last year.

Sancho and Havertz are the only two representatives from the Bundesliga and De Ligt is the sole nominee from Serie A.

Recall that Chukwueze had a decent performance at the Africa Cup of Nations in Egypt and was instrumental to the team’s finishing.

Meanwhile, the winner of the Kopa Trophee will be announced at a ceremony which will take place on December 2nd, 2019.