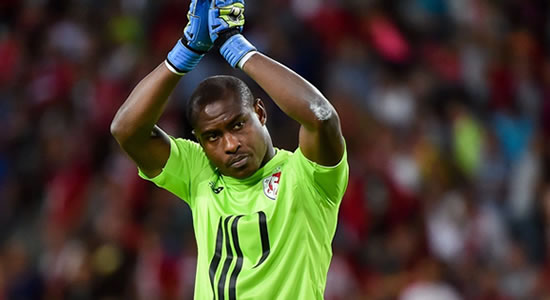 Super Eagles goalkeeper Ikechukwu Ezenwa has identified Vincent Enyeama as his goalkeeping role model of all time. According to Completesports.com, Enyeama represented Nigeria for 13 years and was rated as one of the best goalkeepers to have come out of Africa.

He was part of the Super Eagles team that won the 2013 Africa Cup of Nations of in South Africa. He has also participated in the 2010 and 2014 FIFA World Cups and the 2013 FIFA Confederations Cup.

Ezenwa admitted that he used to imitate the former Lille and Maccabi Tel Aviv shot-stopper during his formative years as a footballer, adding that he still received tips on how to become a better goalkeeper from the 37-year-old.

“My favourite goalkeeper that gives me motivation is Vincent Enyeama,” Ezenwa said in a video interview on Super Eagles Twitter handle.

“The first time in the Nigerian Professional Football League, in 2006, when I signed my first professional contract, everything he did then when he was at Enyimba, that’s the same way I was dressing – the cutting of jersey and every other thing.

“I love him so much, he’s my mentor, even to this day I keep talking to him, trying to learn more from him because from watching him play for the country he gives me so much joy because there is this charisma in him.

“You will never see him panic, the confidence in him that he carries to a game is what I’ve always learned from him and I think it’s paying off for me and he’s a man I will never forget.”