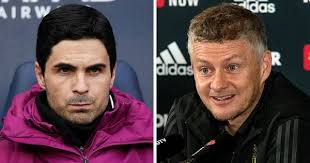 Arsenal captain Pierre-Emerick Aubameyang remains a major doubt for their home Premier League clash with Manchester United on Saturday evening. The forward has missed the last two games after revealing his mother is suffering from “health issues” and mystery surrounds whether he will be in contention for the game at the Emirates Stadium. New signing Martin Odegaard is likely to be named on the bench and the Gunners should have Thomas Partey and Emile Smith Rowe available after the pair limped out of the win over Southampton on Tuesday with minor knocks, while Dani Ceballos and Pablo Mari (both calf) and Kieran Tierney (fitness) could also feature.

Bailly missed Wednesday’s shock defeat to Sheffield United through injury and Martial went off late on with a shoulder complaint.

Solskjaer has checked on Martial and Axel Tuaznebe after the pair were subjected to racist abuse on social media following that loss. Brandon Williams has missed recent matches and Amad Diallo is set to line up the U23s.

According to Opta, these are the statistics and records to be broken:

Arsenal has won their last two Premier League matches against Manchester United, last winning three in a row in September 1998 under Arsène Wenger.

Manchester United are winless in all four Premier League games against Arsenal under Ole Gunnar Solskjær (D1 L3) – the Norwegian is the only Red Devils manager to face Arsenal more than once in the top-flight without winning a game.

Arsenal are looking to record a Premier League double over Manchester United for only the fourth time – the Gunners have won the league on two of the previous three occasions they have done so (1997/98 and 2001/02), also managing it in 2006/07, finishing 4th.

Manchester United haven’t lost three consecutive away top-flight games against Arsenal since May 1991 – the Red Devils last lost three away league games in a row against any single opponent versus Brighton between 1982 and 2018.

Arsenals have kept a clean sheet in each of their last three home games in all competitions, as many as they had in their previous 19 at the Emirates. The Gunners last recorded four consecutive shutouts at home in April 2019, a run that included a home win over Manchester United.

Manchester United are unbeaten in 17 Premier League away games, their joint-longest run without defeat on the road in their top-flight history (also September 1999). The Red Devils have won 26 points away from home so far this season, more than any other Premier League side (W8 D2).

Arsenal manager Mikel Arteta is looking to become the first-ever Gunners manager to win his first three league matches against Manchester United, and only the fourth to win their first three Premier League games for any club against the Red Devils, after Carlo Ancelotti, Manuel Pellegrini, and Garry Monk.

In all competitions, Arsenal’s Pierre-Emerick Aubameyang has scored in four of his last five games against Manchester United, scoring the winner earlier this season at Old Trafford. The last Gunners player to score home and away in a league season against Man Utd was Mesut Özil in 2015-16, while the only player to score the winning goal in both top-flight matches for Arsenal vs Man Utd in a season was Jimmy Brain in 1925-26.

Arsenal’s Bukayo Saka has been involved in seven Premier League goals this season (5 goals, 2 assists), more than any other teenager this term. The last teenager to be involved in more goals in a league campaign for Arsenal was Cesc Fàbregas in 2006-07 (2 goals, 11 assists).