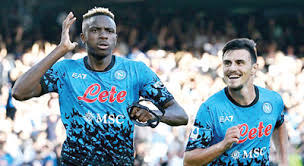 Super Eagles and Napoli striker, Victor Osimhen, has been nominated alongside African duo, Sadio Mane and Mohamed Salah by EA sport among the top hundred (100) best-performing footballers of the year (2022).

EA SPORTS has released the 100-strong nominee list of the best players from the past 12 months and Nigeria forward Victor Osimhen, after having an outstanding twelve months for both club and country made the cut.

The 24-year-old who has been the subject of transfer rumours for the past three (3) windows has been able to contribute nineteen (19) goals and seven (7) assists in 32 appearances for Napoli in 2022.

According to EA.COM, fans will be able to vote for the players between January 10 and 17 with the final results to be released on January 19.