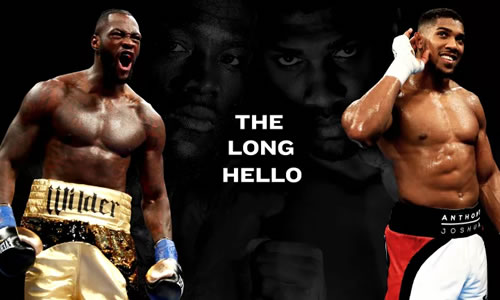 Anthony Joshua believes he owes it to his home fans to fight Deontay Wilder in the UK. The Nigerian British heavyweight champion insists the bout takes place in the UK. Joshua added the WBO heavyweight belt to his existing WBA and IBF straps on March 31 with unanimous decision victory over Joseph Parker.

Now, all the Brit needs is Wilder's WBC belt to hold all four titles and become the undisputed heavyweight champion of the world.

"This is the situation I'm thinking," Joshua said at a Lyons Den Q&A. "So with this Las Vegas talk, I owe it to everyone in Great Britain that has been supporting me to do my best to get this fight in the UK, in my opinion, that's number one.

"He [Wilder] has kind of said, 'alright, cool, come fight me in America'. But the thing is with that, I owe it to the fans and everyone supporting me to do it here.

"And number two, if I go there, there's a lot of tricks that they play in terms of referees and judges and that's why I want to be at home where I'm secure.

"Luckily, we've got enough time to make the fight happen and we're working on it. We've just sent another draft email over to them. It's just the technical jargon that we're going through right now."

If Joshua's team fail to make a fight with the American, he's next likely to face WBA mandatory challenger Alexander Povetkin.

The last undisputed heavyweight champion was Lennox Lewis between 1999 and 2000.