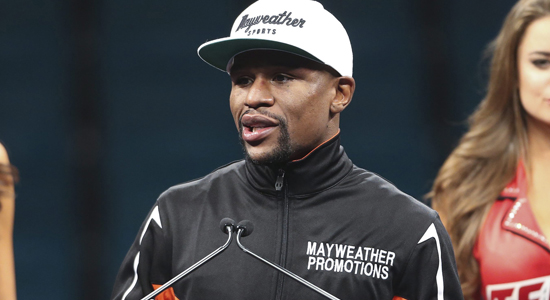 More than any other athlete, boxers have a hard time staying retired and staying out of the spotlight. This is no different for Floyd Mayweather Jr. as he hinted that he may fight again, except this time in the Octagon competing in the UFC as opposed to a boxing ring. Last time we saw Mayweather in action was in August when he defeated UFC star Conor McGregor by 10th round technical knockout in their boxing match at the T-Mobile Arena in Las Vegas.

After the fight in which Mayweather improved his boxing record to 50-0, he said that he was retiring. Of course, Mayweather has retired and then unretired several times before.

A few months after knocking out Ricky Hatton in December of 2007, he abruptly retired, only to come back in September of 2009 to defeat Juan Manuel Marquez by unanimous decision.

Then following his unanimous decision victory over Andre Berto in September 2015 he once again said that he was hanging up his boxing gloves only to come back 21 months later to fight McGregor.

Now it seems that he’s once again ready to come out of retirement but this time he intends to fight in the UFC.

During Showtime’s World Championship Boxing broadcast on Saturday night featuring Jarrett Hurd versus Erislandy Lara, Mayweather was in attendance as a promoter of the event and he spoke to Jim Gray and made it clear that if he does come out of retirement, it will only be to fight in the UFC.

He’s been hinting that he may fight in the UFC for the past several months by posting videos of him in an octagon and has also been training with UFC star Tyron Woodley.

Mayweather is the biggest attraction in combat sports history, and if he were to come out of retirement it will easily be the biggest grossing UFC event in history.

Mayweather is considered by many the greatest defensive fighter in boxing history, and one of the best boxers of all-time pound for pound. But at 41, the odds would be stacked against in the octagon against any skilled fighter.

Question is will he be willing to risk his unblemished combat sports record for a nine-figure payday? Only time will tell.