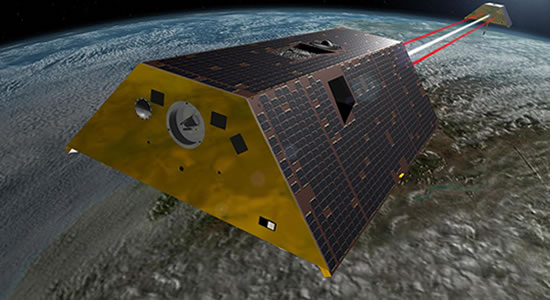 On Tuesday, NASA is launching two new satellites, collectively called GRACE, to replace two that have been retired after 16 years in orbit. GRACE stands for Gravity Recovery and Climate Experiment. The satellites measure — with exquisite sensitivity — changes in the Earth's gravitational field.

They are one of the most important tools for understanding the effects of climate change, and they might also help predict earthquakes.

The satellites rely on the fact that Earth's gravitational field is like bad gravy — it's lumpy. It's a bit stronger over places with lots of mass, like mountains or water or ice. And it's weaker where there isn't so much mass.

You wouldn't notice the difference, but GRACE can. The two satellites fly in tandem, and variations in the gravity field beneath them pull them apart or together by less than the width of a human hair. That allows GRACE to create a gravity map.

The map shows that the lumpiness varies from place to place, and from one month to the next.

Felix Landerer, a geophysicist at NASA's Jet Propulsion Laboratory, explains that a lot of the variation comes down to water.

"As snow accumulates in the mountains," he explains, "it melts in the spring, and into the summer, soil dries up. So that shift of water leaves an imprint on the gravity field, and that's what we detect and what we're after," he said.