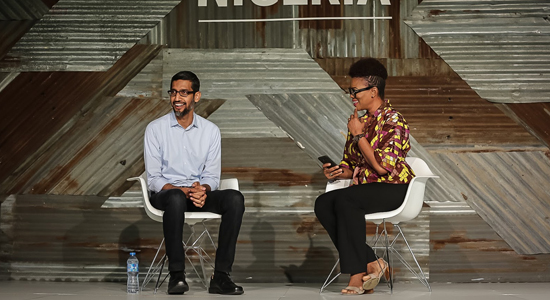 Google plans to train 10-million people for digital jobs, says CEO Sundar Pichai in a surprise visit to Nigeria. He is the latest global tech firm chief to make the pilgrimage to Lagos, the capital of Africa's most populous country, following trips last year by Facebook's Mark Zuckerberg and Microsoft's Satya Nadella.

"Thrilled that we're expanding our digital skills program to train 10M Africans over the next 5 years #GoogleforNigeria," Pichai tweeted.

Nigeria has a 191-million population and an estimated 91-million Internet users as of December 2016. This equates to 47.9% of the population, according to the Nigerian Communications Commission.

Pichai is in Nigeria for a Google conference, where he made the announcement. This follows a year-long programme to train 1-million people with digital skills, which was completed in March.

"Having 1 million digitally skilled young people in Africa is good for everyone. Because we think that if young people have the right skills, they’ll build businesses, create jobs and boost economic growth across the continent,” says Google South Africa country director Luke Mckend of this Digital Skills programme, which offered 89 courses through an online portal and face-to-face training in 20 countries with 14 training partners.

Nadella chose to be in Kenya for Microsoft's biggest launch event in 10 years, for Windows 10 in July 2015. It was seen as a sign of Africa's growing importance.

During his surprise trip last September, Zuckerberg said of Africa: "this is where the future is going to be built”.