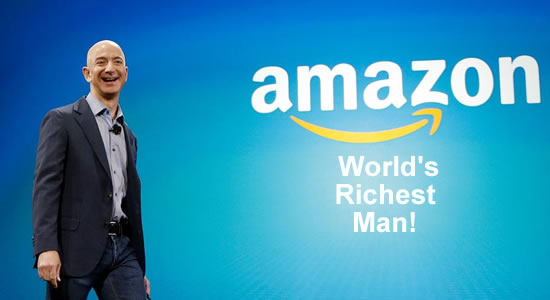 American business magnate, media proprietor, and investor, Jeffrey Preston Bezos has stepped down from his role as the chief executive officer (CEO) of Amazon after nearly three decades at the helm. The leading world’s richest man according to Forbes is estimated to be worth nearly $202 billion. Bezos who joined the billionaire list in 1998 will remain as Amazon’s executive chairman even as he turns over the reins to Amazon Web Services chief Andy Jassy.

Jeff Bezos will not be a part of the daily management and will spend more time on other projects including his Aerospace company Blue Origin.

Bezos changed the way companies around the world operate when he started Amazon as an online bookstore at a garage 27 years back when he packaged orders himself and delivered them to post offices. Slowly and steadily, he took the organisation to new heights and expanded its business in the fields of e-commerce, artificial intelligence, cloud computing, digital streaming among many others.

Amazon, which is often regarded as the most valuable brand on earth, has a market value of over $1.7 trillion.