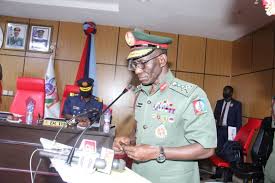 CDS Irabor: Armed Forces Will Give Bandits The Bloody Nose They Desire

The Chief of Defence Staff (CDS), General Lucky Irabor, has expressed his pleasure at the recent gazette of the court ruling which declared bandits as terrorists. Irabor stressed that the development would allow the armed forces to give the bandits “the bloody nose they desire.”

He made this known on Monday while featuring on a current affairs program on Nigerian Television Authority (NTA), Good Morning Nigeria.

Irabor said, “The issue of gazetting the bandits as terrorists is a news that is quite gladdening. That has always been what we had desired.

“What it means is that our tactics, techniques, and procedures that we use in handling them certainly would have to change. It might be inappropriate to begin to tell you what the details of those plans are, but I want to let you know that of course, that will enable all key actors to take certain important actions.

“I believe going forward, I am sure you will be reading the outcome of those engagements. Gazetting them as terrorists gives it a global disposition that will enable other key global actors to now take certain action against them. For me, it will only get better and we will give them the bloody nose that they so desire.”